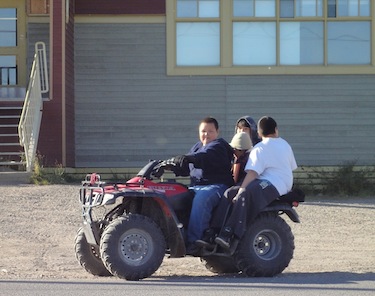 You don’t have to look hard to see young drivers and passenger-packed all-terrain vehicles on Kuujjuaq roads. (PHOTO BY JANE GEORGE)

KUUJJUAQ – Most Nunavimmiut say drivers of off-road vehicles, like all-terrain vehicles and snowmobiles, should be at least 16 years old if they’re operating them in communities.

And drivers should also receive training, wear helmets, and drive at 30 kilometres an hour in town, they say.

That’s what the majority of participants said in recent series of community consultations on off-road vehicles.

The report on these consultations, shared Sept. 14 at the Kativik Regional Government council meeting in Kuujjuaq, calls for:

* no age or speed limits on driving off-road vehicles outside communities or for traditional activities;

* mandatory helmet use but not during traditional activities; and

* subsidized helmet distribution and a gradual phase-in of helmet use;

Now, you can see kids piled on ATVs racing around towns, with several passengers and no helmets.

Horrific accidents, which left a teenaged girl paralyzed and another youth gravely injured and burned, have taken place in Kuujjuaq over the past year.

A survey of students about off-road vehicles in Nunavik schools showed:

* most started driving at an average age of 8.5 years, mainly in the community, to joyride, visit friends and families or go to the store;

* more than three in four have had more than one passenger riding on their off-road vehicle, but the majority don’t find that a dangerous practice;

* about half have had been involved in an accident when carrying a passenger;

* two in three know someone who has been severely injured or killed in an accident; and,

* nearly half are against helmets but most would wear helmets “if everyone else did.”

Operational issues also broached in the public consultations, with most participants saying they want to limit noise, driving under the influence and put limits the number of passengers and speeding.

The majority also said they want to see more signage, sidewalks for pedestrians and increased safety- but not outside communities during traditional activities.

They also asked that for awareness campaigns, more education, particularly for youth, on proper driving and consequences of accidents, and a transportation management office in Nunavik.

Enforcement of Quebec’s highway safety code remains a challenge in Nunavik, because of the climate, the remoteness of the communities and the way ATVs and snowmobiles are used in the region.

To date, municipal bylaws have not been successful in curbing local driving infractions, but a new bylaw will see police receive the responsibility for stopping joy riders in the communities, said KRG lawyer Eve-Marie Préfontaine.

By Quebec law, all Nunavik ATV and snowmobile drivers and their passengers should be over 16, wear helmets and respect speed limits.

The KRG and Makivik Corp. say it won’t be possible to oblige Nunavimmiut to wear helmets unless Quebec laws take the wide use of off-highway vehicles in Nunavik into account.

A report from the consultation will be tabled to Quebec’s transport department in November. The next step is to develop an implementation plan for an awareness plan on off-road vehicle safety and use.