“Knowledge is knowledge — whoever has it” 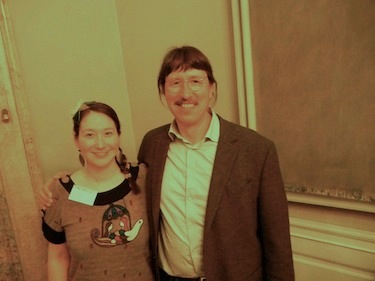 Parnuna Egede and Minik Rosing, both Greenlandic scientists, would like to see more young Inuit study science and work towards a career in science. (PHOTO BY JANE GEORGE)

COPENHAGEN — More young Inuit should consider becoming scientists, Parnuna Egede, who recently completed her graduate studies in biology, and Minik Rosing, a world-famous geologist, both of Greenland, said at a conference in Copenhagen earlier this month.

Rosing, 53, says young Inuit scientists can be “ahead of the game” because they’re able to tap into a vast pool of knowledge about the Arctic

Rosing, a professor and curator at the Geological Museum in Denmark, is renowned for his research on 3.8-billion-year-old rocks from Isua, Greenland.

Rosing’s research helped explain how the earth could stay warm billions of years ago when there were no climate-warming greenhouse gases.

Last July, Rosing told delegates at the ICC general assembly in Nuuk that Inuit should change their attitude about there being “two kinds of knowledge” in the world, traditional environmental knowledge and western scientific knowledge — because there is only one kind of knowledge.

“Knowledge is knowledge — whoever has it,” Rosing said.

Rejecting what science has to say can be “an impediment for the Arctic to be heard in the world,” he said.

Inuit should play by “the same rules” as everyone else when it comes to understanding the world, Rosing said.

“it’s putting you in a corner if you go on and say you’re really, really special,” Rosing told Nunatsiaq News during the recent Arctic climate change and pollution conference in Copenhagen.

There, Rosing and Egede, an advisor on environmental issues at the Inuit Circumpolar Council, were the only Inuit among 400 scientists who attended the gathering.

Egede, 30, said she always wanted to be a scientist while growing up in Nuuk.

Now, with a masters’ degree in biology, Egede recalls how, as a child, she enjoyed poring over the science and nature magazines that her Swedish father read.

In high school, Egede took science courses, and after graduation, headed off to the University of Southern Denmark.

That’s where Egede discovered she wasn’t as well prepared as she could have been.

“I was surprised by the demands,” she said.

Egede was used to excelling at school, but, suddenly, she was surrounded by many other excellent students.

“I had to struggle to get a better understanding and grades,” she said.

The courses were hard, and she hadn’t yet developed the same singled-minded drive and self-discipline which helped other Danish students succeed.

They had also worked hard to get admitted into university’s biology program, while she had entered into one of the spots reserved for students from Greenland.

With her involvement in Greenlandic student politics, Egede ended up taking about twice as long — 10 years — to finish her studies as some other students.

But Egede was relatively better equipped for studying in Denmark than some other students from Greenland because she had gone to elementary school in Danish instead of Greenlandic.

Building up English language skills is essential if they are to succeed in science: “English is the scientific language of the world, the language binding almost all scientists,” Egede said.

Greenlandic scientists are few and far between, she said.

“There is a lot of prejudice against science and a lot of scientists are looked at with suspicion. People think all biologists are enemies, working against hunters and fishermen,” she said.

But there’s also a lot of opportunities for Inuit scientists to get involved in research in the Arctic, where they can also influence policies, she said.