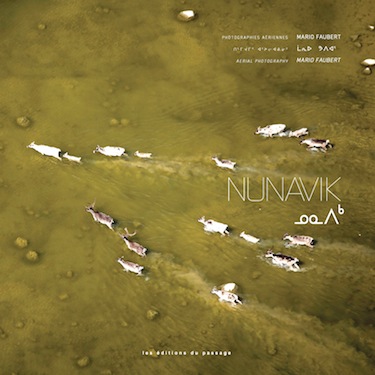 A shot of caribou running is featured on the cover of the recently published, trilingual book, Nunavik-Québec inconnue.(PHOTO COURTESY OF MARIO FAUBERT, LES EDITIONS DU PASSAGE) 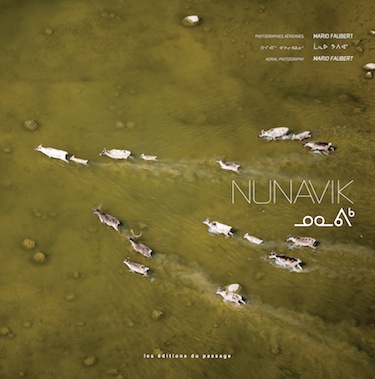 Here’s the corrected title of the the cover of the recently published, trilingual book, Nunavik-Québec inconnue, which has the Inuttitut syllabics properly written so that they say Nunavik instead of Nunapik.(PHOTO COURTESY OF LES EDITIONS DU PASSAGE)

Yet another recently-published coffee table book with photos from Nunavik has been added to the growing stack of pretty books on the region.

This book, called Nunavik-Québec inconnue, has a lot going for it.

First, there are the stupendous colour photos of Mario Faubert, an aerial photographer and pilot, who flew around Nunavik in 2007 and 2008, snapping photos from the cockpit as he went.

Faubert’s images offer land dwellers the view that birds must enjoy as they fly over Nunavik during the late summer, when the ice has nearly all melted away and often the colour of the water can take on a transparent, turquoise hue which is more likely to be found in the Caribbean than in the Arctic.

In his introduction, Faubert says he hopes the book will allow readers “to admire the breathtaking landscapes,” “achieve a deep understanding of this remote region” and “create a bridge between our two cultures.”

On that first goal, Faubert succeeds totally, captivating the eye with his aerial photos which reveal unusual elements of the scenery from above: a peninsula that resembles an oyster shell, a giant inuksuk that stands like a traffic cop in the middle of several roads or the foamy tracks of fast-moving tides in Ungava Bay.

These contributions make for an interesting read because they reveal something we can’t see when their authors are out and about in the public eye.

For example, Simon writes a piece called “The Zen of Blueberry Picking,” with her reflections on that activity, which keeps her centered throughout the rest of the year: “I think most Inuit women understand the strength we can draw from berry picking where even a few litres in a small container, picked over a few hours, can balance weeks of stress and anxiety brought on by the ‘new world’ we all find ourselves part of.”

In her piece, self-government negotiator Minnie Grey evokes tinniq, the lazy low tide of her childhood in Kangirsuk when she used to gather seaweed, mussels and clams.

And lawyer Arteau unveils his hidden poetic side in a short poem that contrasts the “white monster” of a frigid winter in Nunavik with the warmth and spirit of the region.

With texts in Inuttitut, French and English, the book’s publisher also wants to realize that third ambition (almost as heavy as the large 181-page book itself), that is, to foster understanding between “our two cultures.”

If these two cultures are French-speaking Québécois and Inuttitut-speaking Nunavimmiut, the book largely succeeds— although there was a glaring error on the initial cover of the book, furnished to Nunatsiaq News, where the syllabics for Nunavik read “Nunapik.”

And for English-speakers and readers, some of the English parts of the book remain a hard read.

The explanatory English texts accompanying the photos — which were not prepared by the chosen Nunavik contributors — are peppered with grammatical mistakes, poorly translated words and awkward phrasing.

These make the reader of the English version stumble, cringe or laugh, depending on the page.

For example, the word “autochtone,” which means native or aboriginal in French, is translated with the obscure word “autochthon,” which is almost never used in English.

As well, the word “nordique” is literally translated into English as “Nordic,” which is commonly used to describe countries like Iceland or Norway, with Norse roots.

“Northern” would have been a better and more accurate choice of word in referring to anything on Nunavik.

Or there’s also this gem: “families usually construct little chalets”— a sentence that speaks more to Switzerland than northern Canada where “chalets” are cabins in English.

A careful editor or translator could have cleaned up these errors and many more in minutes.

As it stands now, these boo-boos detract from the otherwise impressive book whose superb photos and heartfelt contributions deserve more perfection.

From Oct. 18 to Nov. 12, an exhibition of Faubert’s photos— in large-size formats— will be circulated around building belong to the Caisse de dépôt et de placement du Québec, with details available on the book’s website. 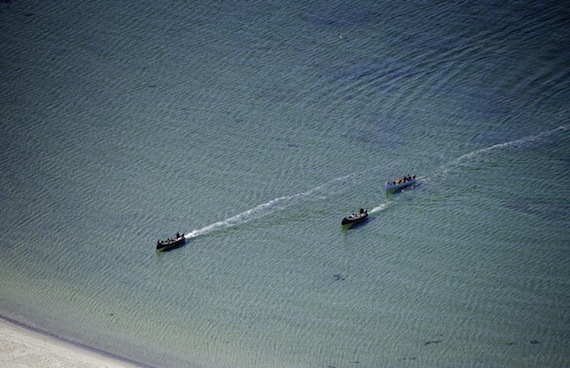 Boats head back to shore on a day where the water is crystal clear in Nunavik— without the aerial photography of Mario Flaubert, we’d have missed this peaceful scene. (PHOTO COURTESY OF MARIO FLAUBERT)