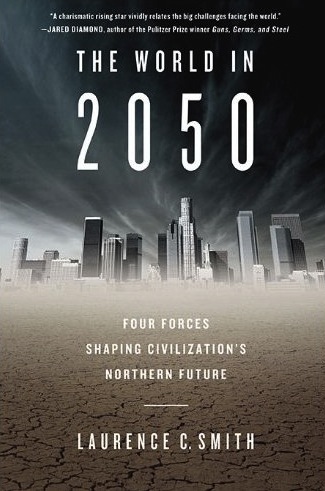 The World At 2050 by Laurence C. Smith, a scientist at the University of California, sees the power of the southern latitudes being moved north and to the countries of the northern rim— northern United States, Canada, Greenland/Denmark, Iceland, Norway, Sweden, Finland, and the Russian Federation— which Smith dubs NORCs,

While the world’s eyes are on melting ice and hungry polar bears, little attention is paid to what kind of home awaits Arctic people in 2050.

That’s the question tackled by Laurence C. Smith in his new book, The World in 2050.

“No doubt we humans will survive anything even if polar bears and Arctic cod do not,” says Smith, a scientist at the University of California who traveled around the circumpolar world to research this book.

As for people in the North, they will say “goodbye harpoon, hello briefcase” by 2050, Smith suggests.

Within 40 years, the High Arctic is likely to resemble Nevada, “a landscape nearly empty but with fast growing towns fueled by a narrow range of industries,” he says.

In this new north, the northern rim countries— northern United States, Canada, Greenland/Denmark, Iceland, Norway, Sweden, Finland, and the Russian Federation, which Smith dubs with the acronym NORCs, will be the new global players.

And Canadian towns, place like today’s Cambridge Bay, Iqaluit and Kuujjuaq, may end up looking like Yellowknife on steroids.

These growing centres will serve as examples to marginalized people whose ecosystems and traditions are decimated by some of the more extreme climate changes in the world, Smith predicts.

Already compared with other places, habitat loss and pollution are less severe in northern Canada and other circumpolar nations, where “the vast boreal forests, tundra and mountains hold some of the wildest and least disturbed places left on Earth,” Smith says.

While there will be new energy sources, the world will remain reliant on fossil fuels, spurring on the North’s growth.

The driving force behind northern development will be “shoveling gas, oil, minerals and fish into the gaping global maw,” Smith says.

And because extraction industries will favour projects nearer the water, the northern future may see fewer new roads than ports.

In The World in 2050, Smith looks at the four forces shaping civilization’s northern future:

• globalization— the world economy will continue to become increasingly interconnected and interdependent; and,

• climate change— global average temperatures will continue to move upward—and more than twice as fast in the Arctic.

The second part, The Pull, describes the emergence of the new northern region of the NORCs.

The last part, Alternate Endings, explores some scenarios for the future, such as:

• the mass migration of life forms to higher latitudes and elevations, and even hybridization between southern and northern species;

• tracking its water resources from space in as soon as 10 years; and

• the “surprising power resurgence” of northern aboriginal peoples in the U.S., Canada, and Greenland.

“I imagine unprecedented new societies taking hold, they are a unique blend of the old and the new, choosing some parts of traditional culture to retain and others to abandon,” Smith says. “In Canada, the first university about the 60th parallel has been founded, the global fleet bristles but the land belongs to them. I see the original stewards of the land taking it back again.”

Already the changes have started, Smith writes, as the North changes from a place “perceived as a maritime graveyard and killer of men” into a frontier ocean with natural-resource riches for the taking.

Smith researched and wrote The World in 2050 before the oil and mineral boom in Greenland got underway— but as new developments start up there and at home, the book offers a useful framework to understanding what’s happening now and what lies ahead in 2050.