20 per cent of Nunavik now made up of protected areas: KRG

Parks and reserves are protected from industrial development 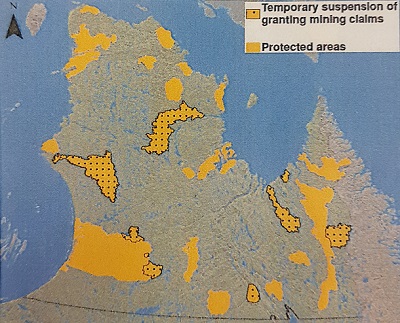 This map shows Nunavik’s protected areas in yellow. The spotted areas indicate areas where mining claims have been temporarily suspended. (Image courtesy of the KRG)

KUUJJUAQ—More than 20 per cent of Nunavik’s land mass is now protected from industrial development.

It’s a goal that both Quebec and Nunavik officials have been working on for roughly a decade, which recently came to fruition when the province temporarily suspended mining claims in nine different areas around the region.

That’s brought the percentage of both temporary or permanently protected areas to 20.97 per cent, the Kativik Regional Government council heard on Thursday, Nov. 29.

As early as 2008, the Quebec government pledged to set aside 12 per cent of its territory above the 49th parallel as parks, park reserves or protected areas by 2015.

A more recent commitment by the province bumped that up to 20 per cent of the region by 2020.

“This is good news,” said Michael Barrette, assistant director of the KRG’s department of Renewable Resources, Environment, Lands and Parks.

“We have worked on this file for over 10 years.”

The region’s land protection process began in 2009 when the KRG, Makivik Corp. and Quebec’s environmental department started consultations with Nunavik communities on plans to protect 11 areas.

Those protected areas are now made up, in part, by Nunavik’s four established parks, which cover 37,000 square kilometres. A fifth park, Iluiliq, is currently in the project phase.

The remaining areas are made up of biodiversity and aquatic reserves, including a 4,000-square-kilometre expanse surrounding the Kovik River basin area in the northwest part of the region.

Another important river in the region, the Nastapoka, is now largely included within the boundaries of Tursujuaq National Park.

KRG park planners noted, however, that all harvesting rights granted to Inuit under the James Bay and Northern Quebec Agreement prevail under any given protected status.

Work continues to set the final boundaries and secure an official designation.

The process remains an ongoing one; the provincial government has already said it will work with Nunavimmiut to safeguard biodiverse areas.