Week-long school program is all about “finding your might” ”Anyone can do anything.” That’s the message from ”Lazylegz” and Tommy Guns, breakdancers with disabilities, shown here with students from Kuujjuaq’s Jaanimmarik School, brought to the community March 7 to 11. (PHOTO COURTESY OF THE KATIVIK SCHOOL BOARD)

Kids in Kuujjuaq got a chance to spin, breakdance and strut their stuff when dancers with the hip hop program, Blue Print for Life, recently pulled into town for a week.

The goal of this group: to teach the kids more than just how to move, says the program’s founder, breakdancer and social worker Stephen Leafloor.

The 10 instructors who set up shop at Jaanimmark School wanted to help students find strength inside their hearts and minds, he said.

“Finding your own might” is what Leafloor encourages kids to do, so that they start to think about the positive things they like to do.

“I’m trying to foster a mentality that life’s exciting when you learn new things, and then those become real positive options instead of drinking, sniffing or whatever,” he told Nunatsiaq News.

More than 90 students signed up for the week-long session of hip hop instruction and talk in Kuujjuaq.

But exercises are mixed with serious talk, he said.

“When I talk, I ask a lot of questions, like how many of you have lied in bed, and been scared when you’ve heard mom and dad drinking. I’ll say ‘put your hands up’ and all the hands go up. Then I make them look around to see everyone’s hands are up, so that they don’t feel alone,” Leafloor said. “When there’s chaos in kids’ lives often they think it’s just happening to me where in reality there’s actually strength in pain…that you’re not alone.”

With so few resources in the North, the strongest things youth have is each other, Leafloor said.

Very rarely does he go to a place where people are already giving “straight talk” to people about abuse and other hard issues, he said.

So, the program includes “difficult conversations,” with Leafloor asking questions like ‘what are the drugs in town,’ or ‘what happens when people drink.’ The answers end up written down on boards which are posted on the gym walls.

Some of the talk is on anger, which leads kids to into mischief or to even to causing damage to themselves.

“There will be a lot of tears, but I also talk about crying being a strength. Strong men cry and strong people ask for help— these are kind of basic things, but they aren’t the message we give our kids enough.”

By time the week draws to an end, Leafloor hopes participants can show how they have transformed to believe in themselves.

“It’s not good enough for me to say it unless they internalize it that life’s worth living, suicide will be an option,” said Leafloor, who wrote his master’s thesis on youth outreach through hip hop.

A public show, where dancers perform a “battle,” the hip-hop tradition of trading rhyming insults in a “battle,” caps off the program.

Leafloor said this becomes more of a “transformational exercise” than a battle, as the kids display their new confidence and respect for their peers.

Leafloor enjoys watching the parents and other family members at the show.

“Many will be crying with pride. So I also think there’s a healing on a community level that happens because sometimes parents give up on their kids and this kind of refocuses them: “our kids can deal with structure,’” he said.

In Kuujjuaq, the program put a special focus of disabilities with the presence of two dancers—Tommy Guns, an amputee, and Luca “Lazylegz” Patuelli, who was born with a genetic condition called arthrogryposis and has only limited use of his legs.

“Anyone can do anything,” Patuelli, a main act at the 2010 Vancouver Paralympics opening ceremony, told Nunatsiaq News. His motto: “no excuses, no limits.”

In 2007, Lazylegz founded team of disabled breakdancers, called ILL-Abilities Crew, which has gone on to perform all over the world.

“Everywhere I go it’s always a bit different. The kids here were a lot more reserved [in Kuujjuaq] in the beginning,” he said. “But we all share the same dreams and ambitions.”

The Blueprint for Life team also recently visited Inukjuak and Akulivik, adding to the 40-plus visits by Leafloor’s team in communities throughout Nunavik and Nunavut.

This week Leafloor plans to travel to Pond Inlet for an “Arctic hip hop leadership summit” for youth from the Baffin region. 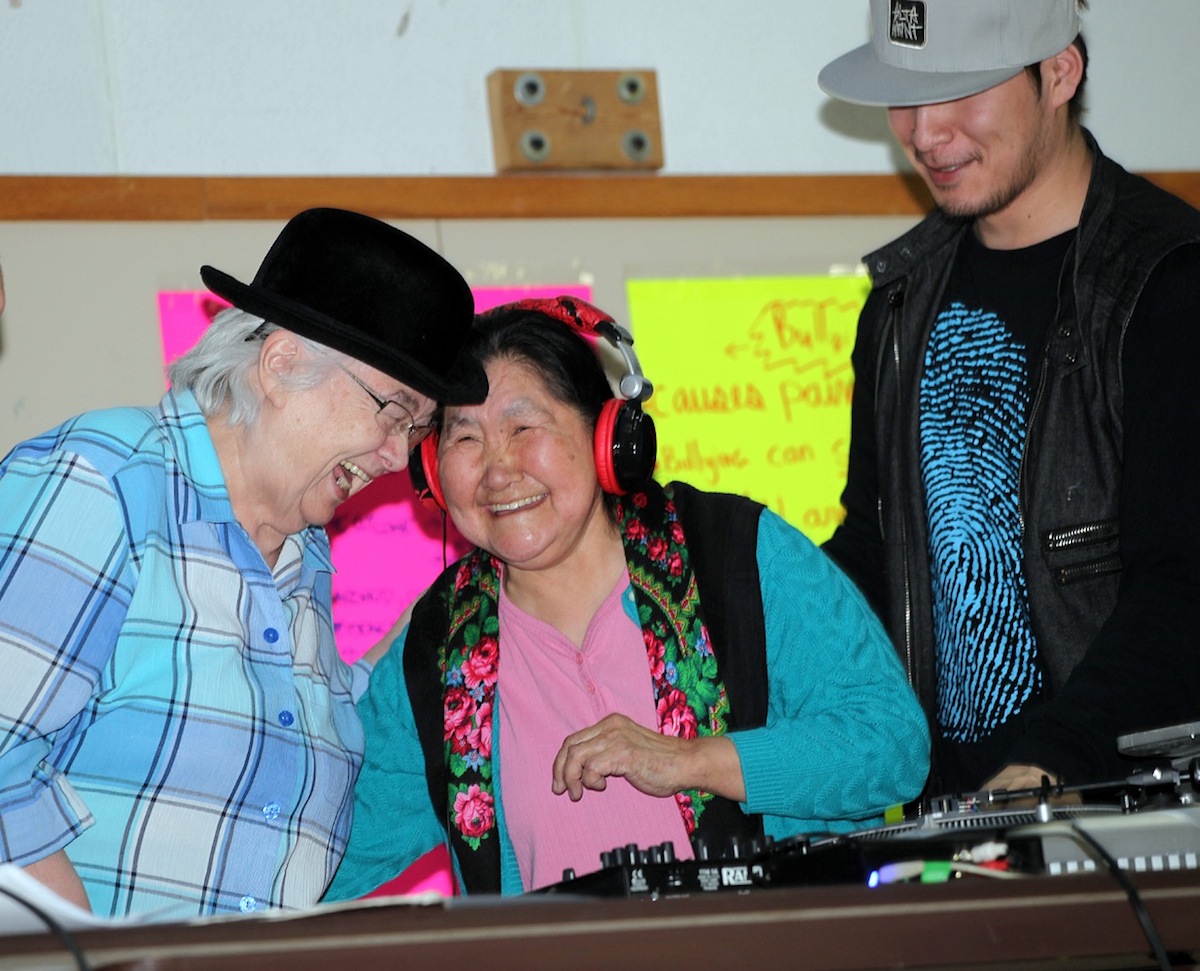 Elder “DJ”s Dorothy Mesher and Sapina Adams start to laugh as they spin the turntable at the March 11 show capping a week of hip hop in Kuujjuaq— something Blue Print For Life organizers encourage because it shows older people can be open to learning new things from youth. (SUBMITTED PHOTO)