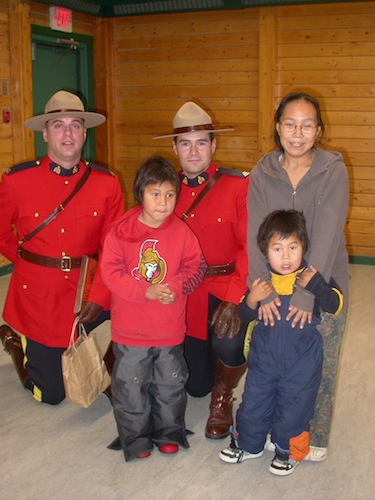 “It warms my heart to see so many people here tonight as we recognize the importance of the RCMP,” deputy mayor Wilf Wilcox told the crow.

Cst. Brown is now stationed in Rankin Inlet, and Cst. Redl plans to leave for BC as a corporal by the end of the year, but Andrew Analivok and his family won’t forget the two members’ time in Cambridge Bay.

With without their quick action this past July, seven-year-old Anavilok would likely not be alive today.

Alerted by passerby Allen Maniyogina that a young boy had fallen into the water at the community’s main dock, Redl and Brown raced down from the RCMP detachment to the shore at about 12:30 am on July 9.

There, Redl said he hoped to find a young boy dog-paddling in the frigid water.

Instead, kids were crying on the dock. As he looked down through the clear water, Redl saw the still form of a young boy on the bottom, about 10 feet down.

Throwing off his heavy-weight duty belt, Redl jumped in— still fully dressed with his boots on, dove down to fetch the young boy off the seabed, and towed him to shore.

On shore, Brown flung the boy over his shoulder, put him in the RCMP truck and rushed him to the health centre, with Redl following close behind.

But no medical personnel had arrived yet at the health centre.

So Brown took out the young boy and immediately started doing CPR on him, on the stairs of the building, where Redl soon joined him in the resuscitation attempts.

The two continued there, noting that the boy was able to expel some water, and appeared— finally— to have a weak pulse.

A midwife looking over at the centre from the nurse’s residence noticed them on the steps, and came to open the centre’s door for them.

Soon, nurses and a doctor arrived, worked on Anavilok— and “the word was good,” Redl remembers.

Redl went back home, changed his uniform and headed back to work.

Redl plays down the role he and Brown played Anavilok’s rescue.

“RCMP officers are saving lives around the country every day and they’re not always acknowledged,” Redl said in a recent interview.

RCMP members are encouraged to stay in shape and keep up on the latest techniques in first aid and CPR. That helped, Redl noted.

Fortunately, the water in the bay was icy cold, too, because its temperature likely triggered what’s known as the mammalian diving reflex, which allows mammals to stay underwater for a long time.

Seals, for example, have this diving reflex, which triggered specifically by cold water contacting the face.

With files from Vicki Aitaok in Cambridge Bay