”I saw the shell start to crack. I was mesmerized.” 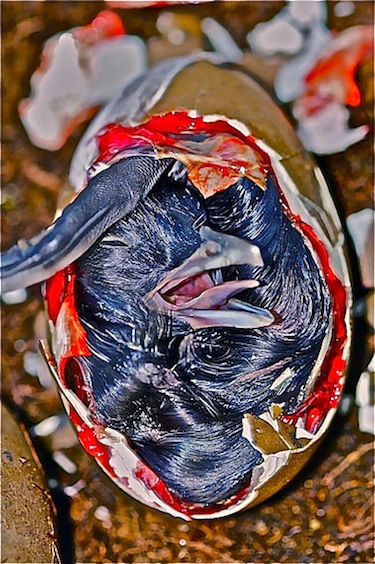 Kangiqsujuaq photographer Yaaka Jaaka caught the hatching of this loon egg from beginning to end. (PHOTO BY YAAKA JAAKA) 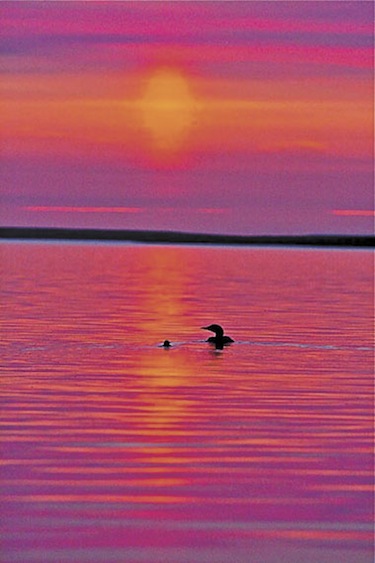 About two hours after they hatch, the chicks are reunited with their mother loon. Loons chicks can swim right away but often spend time on their mother’s back to rest and stay warm. (PHOTO BY YAAKA JAAKA) 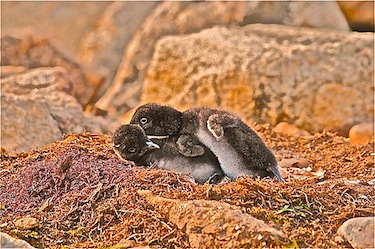 The newly-hatched loons nuzzle each other in the nest. (PHOTO BY YAAKA JAAKA)

One of Yaaka Jaaka’s most memorable moments will live forever — and be shared by many, thanks to his series of photos showing the hatching of two loon chicks.

Jaaka, a guide in Kangiqsujuaq, took a group to visit Pingualuit park in the summer of 2008.

In his spare time, Jaaka spent his time off paddling across Manaqsulik Lake, when he stumbled on a loon’s nest.

He returned the next day with his camera.

“I spent a little over a week watching their progression,” Jaaka says. “The day they hatched, I saw the shell start to crack. I was mesmerized.”

What came out of it was a series of beautiful and intimate photographs of a life cycle that most people don’t see up close.

From behind his lens, Jaaka watched the birth of two chicks unfold, from the first tiny cracks of the egg, to the chicks’ anxious chirps and their first swim with the proud mother loon.

“She and the two chicks swam off into the sunset and I was able to capture the whole moment, which was quite special,” Jaaka recalls.

This wasn’t the first time Jaaka discovered the joy of photography. He’s been using his keen eye and unique exposure to an environment that not many get to experience so closely for years.

The resulting photos portray rich detail, bright colours and a calm that many wouldn’t associate with the Arctic.

“I enjoy taking photographs because of their beauty, detail and the fact that they leave a record of a moment captured in time never to be repeated in exactly the same way,” he says. “And yes, it’s art, I consider it an art form.”

Jaaka remembers the first time he saw a camera.

It was his father’s, a Japanese model. He would send the film south to be developed, Jaaka remembers, and it would take months before they were returned as images on glossy paper.

When Jaaka was five years old, the camera broke and his father gave it to him to play with. For years, Jaaka gazed through its lens and pretended to snap image after image of the wildlife around Kangiqsujuaq.

It wasn’t until 15 years later that Jaaka finally bought a real, working camera for himself. He ordered a Nikon SLR from Toronto Camera and started capturing images of everything around him.

Jaaka went south to study soon afterwards and took an introductory photography course. The rest, he says, he taught himself, experimenting with light, focus and shutter speeds.

“I don’t know if my pictures are unique, but I would like to think that having an Inuk photographing his own land and people provides a unique perspective to his culture,” Jaaka says. “More and more Inuit are buying cameras, printing their own pictures and taking pictures for themselves, which is quite an improvement when we were only seen captured though the lens of the white photographer.”

“Big investment, but I’m loving it,” he says. “The quality of the pictures that this camera takes is worlds apart from anything that I’ve ever used.”

Jaaka recalls life before the digital camera, when he used to send his films to south to a Toronto camera store for development.

The staff there was so impressed with Jaaka’s photos that they offered to develop the photos for free if they could keep some for advertising purposes.

But that became a problem when Jaaka recognized one of his own photos in a photography magazine, with one of the camera store employee’s name attached to it.

He loves to share his work, but says he’s now more cautious about who he shares it with. 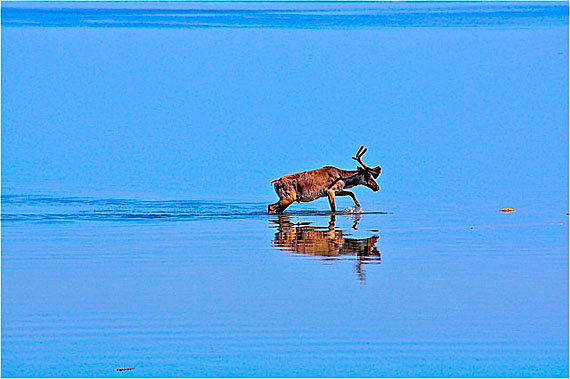 Jaaka photographed this caribou who stopped for a drink near his campsite last summer, about 30 kilometres north of Kangiqsujuaq. (PHOTO BY YAAKA JAAKA)