Edna Elias hands out awards for bravery, volunteerism and contributions to the community 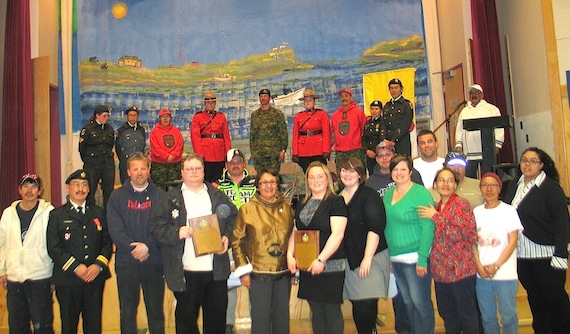 While people in Cambridge Bay were out having fun this past week during the Omingmak Frolics, their more serious accomplishments weren’t forgotten: on May 20, Nunavut Commissoner Edna Elias handed out nine Commissioner’s awards.

The following were called up to receive awards from Elias in the Kullik Ilihakvik, where Elias offered background about their awards::

In the summer of 1976 at Akulailgok (Gravel Pit) in Cambridge Bay, Tommy Kingagolik and two granddaughters, Clara Evalik & Mary Ohokak, were fishing on the ice during ice breakup. Tommy Kingagolik fell through the ice and was hanging on to the edge of an ice floe and the girls were calling for help. Two employees from the Dew-line site were running on to the ice from the shore to help Tommy get out of the water, when they fell through the ice into the water as well, Elias told.

“Norman Evalik Jr. who was 14 years old at the time, came to assist and crawled on to the ice floes and assisted all three men out of the water. Although it was stressful for all, Norman remained calm and saved all from drowning,” Elias said.

During the 50 years that Willy flew his aircraft, he medivaced many people in the Kitikmeot region, saving many lives, delivering babies on his plane. He was there for the search and rescues, volunteering his plane, fuel and time, Elias noted.

Rick Gillis has been active volunteer of Cambridge Bay 3004 Nanook Cadet Corps since the early 1980’s. He was promoted to captain in the early 1990’s. He assisted in the marksman program and soon found himself seriously involved, Elias said.

With his efforts and dedication, 3004 Nanook has become known for its competitive accomplishments, she said.

For nine years in a row, 3004 Nanook won the drill completion of the Northern Region Championship. They won the regionals seven times, representing the northern region at the National Marksmanship seven times. They also won both drill and shooting championships in 2002.

“Rick has dedicated endless hours with 3004 Cadets in order for them to develop these skills and become great role models,” Elias said.

Darrell Ohokannoak has been a volunteer with the Cambridge Bay 3004 Nanook Cadet Corp since the early 1980’s. He was promoted to captain in the early 1990’s.

By his efforts and dedication, he has contributed the successes and many victories of 3004 Nanook in drill, marksmanship and shooting competitions. Darrell has dedicated endless hours with 3004 Nanook Cadet Corp in order for them to develop these skills, Elias said.

Annie has invested many hours in volunteer work for the community, helping with special events.

“Her leadership is also recognized for running a healing camp in Cambridge Bay,” Elias said.

“The Youth in Cambridge Bay would be lost without the support of very caring and compassionate Daisy Eyegetok,” Elias said.

Daisy has volunteered with many teens for years. She actively engages the teens assigned to her care using coaching and feedback to assist in their development as positive role models, Elias said.

Daisy offers many skill sets and abilities to Cambridge Bay, with particular strengths in the areas of creativity and community engagement in basketball and sports for teens.

“She is consistently seen as willing and able to contribute to the betterment of the youth programs and services,” Elias said.

Miranda is an exceptional youth who is highly active in the community. She has organized and helped supervise many events such as the opening of the Youth Center, two Polar Bear Dips fundraisers, multiple teen dances, 2008 Swim Meet, Christmas celebrations , Cambridge Bay Amazing Race, to name a few.

“She has set the standard by empowering others through her leadership in working with youth,” Elias said.

“The Wellness centre has dedicated staff who works under the belief that all the people of Nunavut matter and they are committed to making CamBay a good place to live in,” Elias said. “They offer a early morning breakfast for kids, they run a women’s shelter, they cater for user groups and various organizations so they can keep food in the food bank and keep it operational, they offer Xmas hampers and Easter hampers to families in need, they organize feast for special events, they offer counseling to those in need, they provide coffee/tea and all funerals and special supports to people grieving. They work in partnership to provide programs for all ages; they hire summer students to work with youth and to support youth.

They have demonstrated a commitment to the people of CamBay which far exceeds the demands of their contractual agreement. They demonstrated a great deal of respect for the Inuit Culture, language and traditions of Nunavummiut by integrating these into their work assignments.”

The community of CamBay would be in big trouble without these men and women who volunteer on the fire department and emergency response team, Elias noted.

“They put their lives at risk and are on call 24/7. It takes a tough but compassionate soul to do this kind of work. Several of the members have been on this Volunteer Fire & Emergency Response for years and they never miss a call or an opportunity to help out,” Elias said. “Courage is the ability to confront fear, pain, risk/danger, uncertainty, or intimidation. These folks do all this and then go to work the next morning and some community members have no idea what they did for us.”