Friends gave chase to Kolola on the night Mountie died

“I wanted to make Pingoatuk stop before it gets worse” 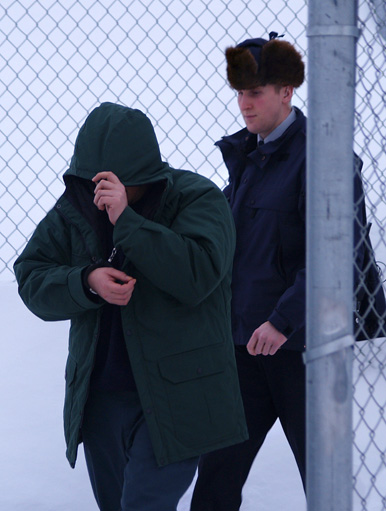 Pingoatuk Kolola is led out of the Nunavut Justice Centre in Iqaluit, Tuesday Feb. 23. Kolola is on trial for the first-degree murder of RCMP Const. Douglas Scott in Kimmirut in November, 2007. (PHOTO BY CHRIS WINDEYER)

Two friends of Pingoatuk Kolola tried to intervene when he chased his common-law wife and his niece through the streets of Kimmirut on Nov. 5, 2007, witnesses said Tuesday at Kolola’s first-degree murder trial in the killing of RCMP Const. Douglas Scott.

Sam Pikuyak, who worked with Kolola at the Kimmirut Housing Authority, told court he chased Kolola by snowmobile as Kolola drove through town with his eight-month old son Adam in the truck beside him.

Kolola had been drinking after a quarrel with his common-law wife.

“I wanted to make Pingoatuk stop before it gets worse,” Pikuyak said in his evidence. He also said he used to go hunting with Kolola as often as once or twice a week when there was sea ice.

Pikuyak said he directed Scott to the place where Kolola eventually got his truck stuck on top of a pile of construction material but said he didn’t hear the rifle shot that killed Scott while he sat behind the wheel of his police truck.

Pikuyak said that because of the noise of the running snowmobile and his own hearing problems, he couldn’t hear any gunshot.

But when he went back to help Scott, he saw a hole in the passenger side window of Scott’s truck, which was still running.

“When I looked closely he wasn’t moving at all,” Pikuyak said. “That’s when I saw the bullet hole.”

Thomasie Keenainak, another friend and co-worker of Kolola’s at the housing authority, said Pikuyak woke him at his house to tell Keenainak about what was happening.

When he and Pikuyak saw Kolola’s truck stuck in the construction materials and spinning its tires, Keenainak said he went to the housing authority office to get a camera to record the accident. Keenainak said he passed Scott on the way and told him where to find Kolola.

Keenainak left to tell Kimmirut’s other RCMP officer, mayor and local elders about what had just happened.

Kolola eventually returned to his house, where another friend came to talk to him. The friend told Keenainak that Kolola wanted to surrender. Keenainak said he later spoke with Kolola on the phone.

“He said he was sorry for fucking me up,” Keenainak said.

The trial also heard from three other witnesses who heard the shot that killed Scott, who was 20 at the time of his death.

Rosemary “Ooloosie” Kolola, another niece of Pingoatuk Kolola, had earlier tried to intervene her uncle’s dispute with his common-law wife.

She testified that he nearly ran her over with his truck. She got away and found a hiding place nearby, at a friend’s house, where she saw Scott arrive at the location where Pingoatuk’s truck had become stuck.

“A couple of seconds later we heard a loud bang,” Rosemary Kolola said. “It sounded like a gunshot.”

Oola Pitseolak, Kolola’s neice, and her friend, Qutaigo Kootoo, each said they heard the shot while they were standing on the porch of her nearby home.

Pitseolak said the shot rang out almost immediately after Scott’s truck came to a stop.