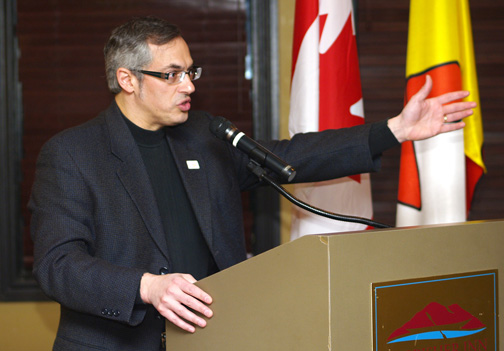 Industry minister Tony Clement speaks to the board of the Canadian Chamber of Commerce in Iqaluit April 10. Clement has been under fire for the federal government’s controversial decision to scrap the long-form census. (PHOTO BY CHRIS WINDEYER)

Keith Peterson said the Government of Nunavut relies on information from the long-form census to shape policy on a range of issues from poverty and housing to healthcare and education.

“We have unique circumstances up here,” Peterson said July 22. “The kind of data that can help us can only come from the people (of Nunavut) themselves.”

The Conservative government touched off controversy last month when they announced the decision to scrap the mandatory long-form census, which was mailed out to 20 per cent of Canadian households.

Backers of the decision hailed it has a blow to “big government,” arguing Ottawa has no right to know some of the personal information the census seeks.

The right-wing Sun newspapers carried an editorial comparing the long-form census to the excesses of communism.

“If (the federal government) has no business in the bedroom, then it has absolutely no business knowing how many bedrooms are in our homes.”

But Peterson said the GN needs information like that so it can plan how to spend millions of dollars every year on new housing construction.

Nunavut has the highest rate of overcrowding—defined as more than one person per bedroom—in the country, at nearly four times the national average. In some communities, more than 30 per cent of the population is overcrowded.

So to Peterson, information like how many people live in a household and what their ages are helps guide decisions about what kind of housing to build, he said. “To me, that’s valuable information we would have at our fingertips.”

In a statement, Industry Minister Tony Clement said the move was a response to Canadians who complained that the survey was too intrusive and that it was unfair to punish people for not filling out the form.

“The government does not think it is necessary for Canadians to provide Statistics Canada with the number of bedrooms in their home, or what time of the day they leave for work, or how long it takes them to get there.”

“The government does not believe it is appropriate to force Canadians to divulge detailed personal information under threat of prosecution.”

But the decision also prompted howls of protest from academics, social groups, and local governments who rely on data from Statistics Canada, much of which is gathered from the long-form census.

Peterson said Nunavut’s own bureau of statistics collects some of its own data but relies on information from Statistics Canada.

“We do collect some data, but the amount of detail and the quality of the data we collect is limited for any number of reasons,” Peterson said. “We just don’t have the resources and capacity.”

Peterson is also concerned unilingual Inuktitut-speakers won’t be counted in future studies, because it will simply be too much hassle to complete the voluntary survey.

And Munir Sheikh, the agency’s chief statistician resigned July 21 in protest over the government’s decision.

“The long form census is one of the key tools Inuit use to understand the size of our populations and assess the conditions in which our people live, including the level of social disparity,” she said in a statement. “Without it our current data systems will be severely disabled.”

Peterson said the GN hasn’t formally complained to Ottawa about the decision, but said he hopes provincial and territorial premiers will complain about the move at the upcoming Council of the Federation meeting in Winnipeg.

He also hopes public outcry will convince the Conservatives to back off from the decision.

“Governments always reserve the right to change their mind,” he said.

With a report from Postmedia News.