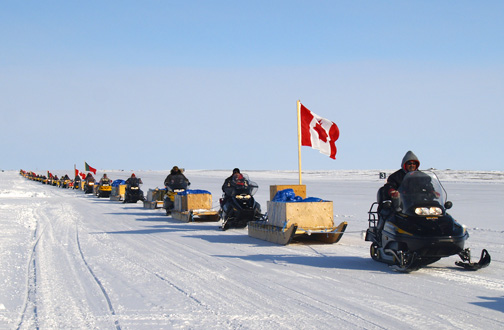 Canadian Rangers parade down the airstrip at Alert during Operation Nunalivut this past April. While the Rangers are typically how Inuit take part in enforcing Arctic sovereignty, Inuit Tapiriit Kanatami is miffed that Canada signed a military cooperation agreement with Denmark, without consulting ITK. (PHOTO BY CHRIS WINDEYER)

Inuit Tapiriit Kanatami is miffed by the quiet announcement earlier this month of a military agreement between Canada and Denmark.

The two countries signed May 14 a memorandum of understanding pledging to work together more closely in the Arctic “through enhanced consultation, information exchange, visits, and exercises,” a Canadian Forces news release says.

In a blog post entitled “That’s news to us” on ITK’s website May 21, president Mary Simon said the federal government should have consulted Inuit before signing the accord.

“One would think that if the Government of Canada was entertaining the idea of entering into agreements with other countries to conduct military exercises in Inuit Nunangat that they would at least mention it to Canadian Inuit,” Simon wrote.

The May 14 announcement came on the 100th anniversary of the founding of the Canadian Navy and a day after a Canadian soldier was killed in Afghanistan.

Demark and Canada have been trying to strengthen military and diplomatic relations in the Arctic as a way to reduce tensions over border disputes between Ellesmere Island and Northern Greenland. The two countries have also teamed up to map the continental shelf in the region.

In a news release, Gen. Walter Natynczyk said military cooperation will help the two countries better respond to emergencies in the remote region.

But Simon argued ITK should be included in the decision-making process for such agreements.

“We [Inuit] are a valuable resource the government of Canada has yet to take advantage of even though we are the first to be impacted when decisions of this nature are made,” she wrote.