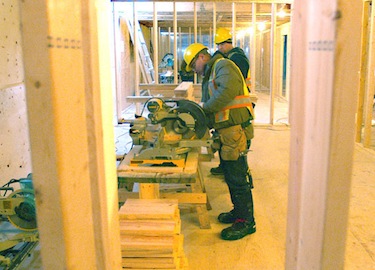 Workers inside one of the many 10-plex units built throughout Nunavut under the Nunavut Housing Trust social housing construction program. (FILE PHOTO)

Changes to the way the Government of Nunavut collects paper work from housing contractors are pushing some smaller contractors to the brink of bankruptcy, says the Northwest Territories and Nunavut Construction Association.

In a letter addressed to Nunavut cabinet ministers, MLAs, senior GN staff and Nunavut’s MP, Leona Aglukkaq, association president Bob Doherty complains that changes in the wake of $110-million worth of cost overruns at the Nunavut Housing Corp. create more work than small contractors can handle.

“We suggest to you that many of these practices are not consistent with the terms of the contracts, the provisions of (Nunavummi Nangminiqaqtunik Ikajuuti), and are just out-and-out wrong,” Doherty wrote in a letter dated May 9, and provided to Nunatsiaq News by the association.

“I don’t think we are exaggerating when we say that this could lead to the collapse of the Nunavut-based construction industry.”

Among the association’s complaints:

• Contractors are on the hook for missing or damaged building materials, even though the Nunavut Housing Corp. often leaves supplies scattered around communities all winter long;

• Inuit owners of construction companies are no longer being counted as local Inuit content, because owner names don’t appear on payroll rosters;

• The association also complains that the GN is taking far too long to release holdbacks, the amount of a contract withheld until housing units are finished.

“We cannot help but believe that the GN has decided to recover some of the losses it created for itself on the Nunavut Housing Trust debacle, by offloading onto the backs of northern contractors,” Doherty writes.

No one from the GN was available to comment for this story, though a GN source confirmed receipt of the letter and said the government was in the process of drafting a response.

Phil Moon Son, the executive director of the NWT and Nunavut Construction Association, said his organization has received a flood of interest from more than 30 Nunavut contractors looking to get on the association’s mailing list for updates.

He said some contractors have lost tens of thousands of dollars because of the rule changes.

Son said he understands the government’s need to cut costs as it tries to get out from under a $50-million deficit caused by millions of dollars worth of cost overruns at the housing corporation.

But he said the rule changes amount to changing a contract after it’s signed.

“Our members don’t feel the GN should be making these policy changes without consultation,” he said. “At the end of the day, a contract is a contract.”

Son said some association members have mulled taking legal action against the territory, but haven’t because of they’re worried about the potential long-term impact on their businesses.

“They don’t want to aggressively bite the hand that feeds them,” he said.