Nunavut government should get money back for report lacking letter grades, MLA says 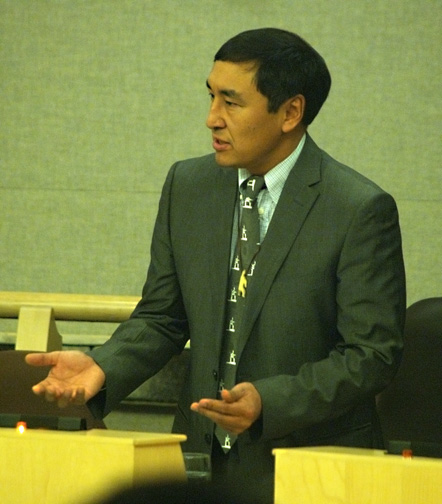 Paul Okalik thinks the Government of Nunavut should ask for its money back from the consulting firm that carried out the Qanukkanniq GN report card this past summer.

The Iqaluit West MLA said North Sky Consulting, the Yukon-based firm that carried out the wide-ranging report on the state of the GN, didn’t provide letter grades like it was supposed to, and focused too much on the negative.

“All I’m asking is are we going to ask for our money back?” Okalik told reporters Tuesday. “They [North Sky Consulting] provided a flawed document.”

In Question Period Tuesday, Okalik asked Premier Eva Aariak if the GN could expect a refund.

“If we had worked on it, we would have been fired,” Okalik said.

Absolutely not, the premier replied.

“Everything was completed… I hear from the public that they’re very appreciative of the fact that they have been asked questions and that we would like to get their input.”

Okalik, who served as premier from 1999 until 2008, also claimed during question period that the report card focused on the GN’s failings, and not enough on what’s been working.

“What we saw was just negative issues,” he said.

Back in May, Aariak told Nunatsiaq News that Qanukkanniq would also report on “what is working, so we can continue the good work.”

In the assembly, Aariak said the report card did produce positive findings too. “Reading the report, it’s self-explanatory,” she said.

Okalik wouldn’t answer directly when asked by reporters if he thought the report card was invalid because of his criticisms.

“They’re just opinions that were presented of the past government and each person has a different opinion of what may have taken place,” he said.

The Legislative Assembly’s second session got underway Tuesday. With few questions or statements by MLAs, the first day of the sitting was over in an hour and 15 minutes.