“Our emphasis is not on selling” 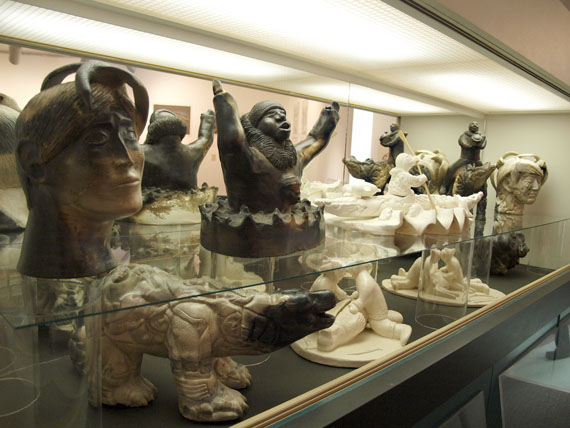 Some of the Matchbox Gallery’s ceramics on display at the Nunatta Sunakkutaangit museum in Iqaluit from June 25 until Sept. 11. (PHOTO BY CHRIS WINDEYER) 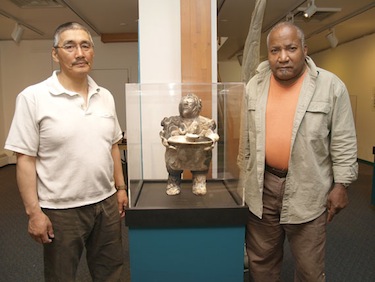 Confidence makes for better art, he says. It allows artists to collaborate and to produce a work for the ideas and emotions it conveys, not just for a quick sale at a hotel or restaurant.

And it’s at the heart of what the gallery, celebrating its 25th anniversary with an exhibition at Iqaluit’s Nunatta Sunakkutaangit museum, has done since its inception.

“Our emphasis is not on selling,” Shirley says during a break from putting the finishing touches on the Iqaluit exhibit ahead of its June 25 opening. “It’s very important to have some alternative to just cranking something out.”

They key to that is providing artists infrastructure: space and equipment with which to work.

But the gallery also provides training in life skills like literacy for its artists, which gives them the confidence to do their work.

“You’re just going to be a victim in today’s world if you don’t know how to read,” Shirley says.

This exhibit is centred mostly on the unique ceramic pottery the gallery has become renowned for.

“Giving Thanks” by Pierre Aupilardjuk greets visitors to the Iqaluit exhibition. It’s an intricate work of a figure holding a qulliq.

Inside the qulliq is another figure holding a smaller qulliq, representing one generation teaching the other how to use the qulliq, Aupilardjuk says.

And the main figure is adorned by numerous other faces and figures, right down to the kamiks. The detail, done by Leo Napayok, another Matchbox mainstay, is incredibly delicate.

That’s another unique feature of the Matchbox Gallery: two, even three artists will often collaborate on a work.

“I really like that,” Aupilardjuk says. “It makes the art work look better.”

The collaborative approach is central to what the Matchbox Gallery does. Shirley says it developed naturally, from artists sharing space and bouncing ideas off each other.

“We are a collective, not a bunch of individuals who want to be separate from one another,” he says.

Rankin’s heritage of ceramic art dates back to the late 1960s and a government program founded to help people find work after the nickel mine there closed.

That program had closed by the time Shirley, originally from New York City, arrived in Rankin in 1978 to work as an arts and crafts development officer for the Government of the Northwest Territories.

“I said, ‘Gee, why are they shutting this thing down?’” A little over eight years later, the Matchbox Gallery was born.

Shirley says he hopes the display of ceramics in Iqaluit, gets a dialogue going between artists in different regions of Nunavut.

While some view the sheer amount of Inuit art as flooding its own market, Shirley feels Nunavut artists can reach even greater heights of creativity.

“The potential that people have is not even remotely being dealt with,” he says.

The exhibit isn’t solely comprised of ceramics however. It also features Shirley’s own surrealist oil landscapes and the watercolour scenes who is wife Sue, who paints scenes of the land around Rankin Inlet.

It also includes work by Baker Lake printmaker Jessie Kevalogak, who creates scenes and portraits on black paper out of bright, bold colours and figures of fish.

Fish are central to Kevalogak’s work because they are the food that allowed her family to survive the starvation that ravaged the Kivalliq region in the 1950s.

“When I am drawing, I am mostly thinking about the time when my family was out on the land trying to survive,” Kevalogak says on the gallery’s website.

“I remember a time when we only had one fish left for the whole family. That’s why I always put fish into my drawings. I still recall using a fish hook made from bone to catch that fish.”

The works at the Iqaluit exhibit are part of the Matchbox Gallery’s permanent collection, which has been shown at the National Gallery in Ottawa and in Switzerland, with more exhibits planned. They’re not for sale, although artists can and do sell other works they produce at the gallery.

The exhibit runs at the Nunatta Sunakkutaangit museum through Sept. 11.