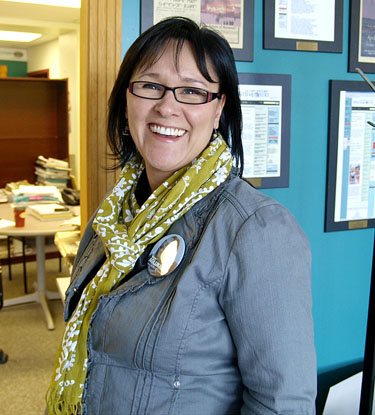 Leona Aglukkaq is seeking her second term as MP for Nunavut. This time she’s promising to push for money for major transportation and infrastructure projects. (PHOTO BY CHRIS WINDEYER)

After two and a half years as the federal health minister in a minority parliament, Aglukkaq is campaigning for her second term as Nunavut’s MP.

This time out, she’s promising big-ticket infrastructure if she’s elected to return to Ottawa: a hydroelectric dam in Iqaluit, a power line and road connecting the Kivalliq with Manitoba, and deepwater anchorage for cargo ships in Iqaluit.

“No one is pushing those major infrastructure initiatives in any party,” she said in an interview. “I am committed to working on pushing those files forward.”

She said such projects would help reduce the cost of living by pushing down energy prices and the cost of goods.

And while Aglukkaq wouldn’t give specific figures, she said there will be room in Conservative budgets to pay for the promises.

She also said P3 Canada, a Crown corporation the Tories set up to push public-private partnerships, can also play a role in funding major infrastructure projects.

As the incumbent, Aglukkaq is the natural target of the other candidates, New Democrat Jack Hicks, Liberal Paul Okalik and Green Scott MacCallum.

She said that during her first term she’s brought a large amount of federal money to Nunavut in the form of funding for housing, health care, education and the headquarters of the Canadian Northern Economic Development Agency (CANNOR).

She’s faced criticism over the amount of money the Conservatives included in their last two budgets for housing in Nunavut and complaints over the new Nutrition North Canada food subsidy program.

Aglukkaq responds by saying the Tories gave Nunavut $300 million for housing alone since 2006 and that that money is still rolling out.

As for Nutrition North, Aglukkaq seemed to be a little frustrated by the attacks on the program. She said it was developed in consultation with land claim organizations, mayors and the Government of Nunavut.

And she’s especially eager to mention that Okalik, as premier, wrote to then-Indian and Northern Affairs minister Andy Scott to demand changes to the old food mail program.

While some have complained about that Nutrition North has made it harder to place personal orders, Aglukkaq said the program places more emphasis on Nunavummiut who don’t speak English or have a credit card and who have to shop at the local Northern or co-op store.

“For people who are not working, who are on fixed incomes, they have no choice but to pay the outrageous prices that they see in the stores,” she said.

Aglukkaq has been travelling relentlessly during the current campaign and predicts she’ll make it to 20 of Nunavut’s 25 communities before May 2, weather permitting.

She estimates she’s spent a total of 23 hours on community radio so far.

After an interview April 25, she boarded a plane headed to the Kivalliq region, where she planned to campaign in Arviat, Whale Cove, Repulse Bay and Coral Harbour.

The Kivalliq, along with the Kitikmeot were the regions that put her over the top in 2008. She’ll need to hold on to her vote there if she wants to win again.

“I hope people will remember what they’ve seen in the last two years,” Aglukkaq said.