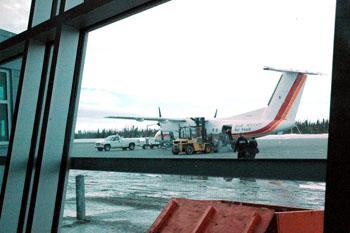 The money will help pay for the construction a new $37.5-million “aeronautical complex” at Montreal’s Trudeau airport.

Air Inuit plans to move from its current location, buy a de Havilland Dash-8 flight simulator from CAE Inc. and build a hangar next door to Air Transat’s facility on Côte Vertu Rd..

The move is expected to create about 40 new jobs are expected at Air Inuit, said a May 24 Quebec government news release.

Workers at the new hangar will provide aircraft maintenance and refurbishment services to other airlines.

Air Inuit’s plans for the new flight simulator include training Air Inuit pilots as well as those of other companies.

“Building the new Air Inuit hangar, as announced today, will make it possible to develop transportation services to the communities of Nunavik and will contribute to the execution of the Plan Nord, benefiting all Quebecers,” Charest said in the news release.

“The Quebec government’s contribution reaffirms our partnership and our determination to improve the living conditions of the Inuit in Nunavik,” Aatami said.

“We are delighted that Air Inuit has selected Montréal-Trudeau to establish its new operational base for its coverage of northern Quebec,” James Cherry, president and chief executive officer of Aéroports de Montréal, said in the news release.

At its new location, Air Inuit will have a new long-term lease of between 30 and 40 years, Cherry told the Gazette.

The $5 million comes from Quebec’s new “Strategic Support for Investment Program” and is part of its Plan Nord development scheme.

That program is supposed to support investment projects and product development in Quebec, increase productivity and create jobs.

More money is likely to flow from Plan Nord to Air Inuit and First Air.

By 2015, Makivik, along with the Kativik Regional Government and its regional airlines say they want to see:

• a new air terminal building in Puvirnituq (construction is expected to start this summer);

• the extension of Kuujjuaraapik’s runway to 6,500 feet;

• CATSA to provide passengers screening services in Puvirnituq; and,