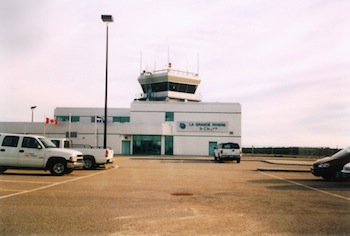 An Air Inuit employee sprang into action this past weekend when a floatplane en route to Nunavik crashed not far from the La Grande airport. (PHOTO HARVESTED FROM PANARAMIO.COM)

Investigators from the Transportation Safety Board want to know why a floatplane crashed in the James Bay region this past weekend, leaving two dead and three injured.

The survival of the three injured passengers is credited to the quick arrival and actions of Air Inuit employee Jonathan Perrier, who kept them from drowning until first responders arrived on the scene.

The NordAir Beaver DHC-2 left the La Grande airport on the morning of July 24, carrying four tourists from southern Quebec and Ontario to Nunavik for a fishing trip.

NordAir pilot Glen Arsenault, 34, died in the crash along with Gatineau teacher Michael Robinson, 40. The three survivors were flown to a Montreal hospital with serious injuries.

Air Inuit employee Jonathan Perrier was among the first at the scene of the accident, in a swamp of about one metre deep.

Perrier told Canoe.ca that although the plane was completely destroyed, he saw movement and quickly went help the three survivors.

Perrier kept the survivors’ heads above water until other help arrived.

The most difficult discovery Perrier made that morning was the body of his long-time colleague, Arsenault. The pilot is thought to have died on impact.

The crash happened in clear weather, Gagné said, and officials still don’t know what caused the plane to go down. Investigators remain at the scene until Tuesday.

The La Grande crash was the fourth small plane to go down in Quebec since May.

Including the latest victims, 19 people have been killed in Quebec crashes over the last three months — three involving float planes, which are commonly flown in northern Quebec during the summer and early autumn months.