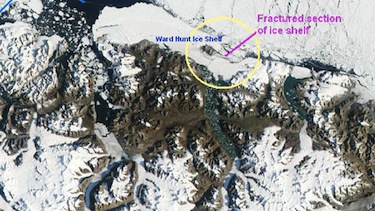 This NASA image shows the section of the Ward Hunt ice shelf which recently broke off. (IMAGE/NASA)

A huge chunk of ice about the size of Bermuda has cracked off Canada’s largest remaining Arctic ice shelf.

“The whole northeast quarter seems to have gone,” said Trudy Wohlleben, a senior ice forecaster at the service, who first noticed cracks developing on the shelf in early August. Satellite images over the last week have confirmed the huge chunk of ancient ice shelf has broken away, she says.

The breakup points to the profound change underway in the Arctic and the accelerating loss of a unique and “majestic” part of Canada’s landscape, says John England, University of Alberta earth scientist.

The Ward Hunt is the largest of the remaining ice shelves that have clung to Ellesmere Island for 3,000 to 5,000 years. They contain the oldest sea ice in the northern hemisphere, England says, and have no counterpart in Greenland or Russia.

“They’re our California redwoods, they’re our pyramids, they’re a really unique, intriguing aspect of our Canadian landscape,” says England. “And they are disappearing.”

The fracturing of such a large chuck of the Ward Hunt is one of the more remarkable changes Wohlleben and her colleagues have seen in the Arctic this summer, which has seen plenty of action.

“This year, the ice seems to be fracturing all over the Arctic once again,” Wohlleben said in an interview, noting that 2009 had been quiet compared to 2008 and 2007.

Wohlleben was also the first to spot a gargantuan chunk of ice that calved off Greenland’s Petermann Glacier this summer. It is about 251 square kilometres in size – four times the size of Manhattan – and is drifting toward Canadian waters.

While the Greenland iceberg is much bigger, England says the loss of such a big chunk of the Ward Hunt shelf is in some ways more significant because the ice is so old.

“It’s not like these things come and go every few years or decades,” says England, noting that it would take centuries of cold weather to regrow Ellesmere’s ice shelves. “We can’t just sweep it under the carpet and say ‘It’s one of nature’s cycles’,” he said of the disintegration that shows little sign of letting up.

There are still several weeks to go before the Arctic ice pack reaches its minimum for this year. At this stage Wohlleben says it doesn’t look as if this will break the record ice retreat seen in 2007.