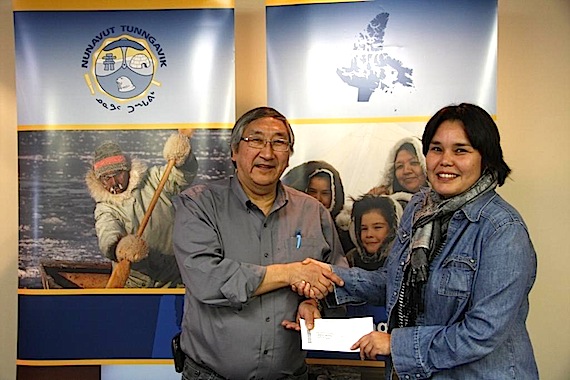 The Inuit Broadcasting Corporation has netted more financial support for its new media arts centre project, with a cheque for $200,000 from the Kitikmeot Inuit Association this past week.

The $10-million Nunavut Media Arts Centre, scheduled to open in Iqaluit in 2013, is to be the territory’s first digital audio, video, recording, performance and post production facility.

“IBC’s Board of Governors truly appreciates the support that the KIA has shows to our regional office in Taloyoak over the past fifteen years, and now their foresight in looking ahead to develop media arts as a thriving industry in Nunavut’s future,” said IBC president Madeleine d’Argencourt in a May 27 news release.

Over the past months, the IBC has also received money from the Qikiqtani Inuit Association, CanNor and the Government of Nunavut’s economic development and transportation department.

The IBC has completed the structure’s design and a thermosyphon foundation has been installed at the future site – a heating system that circulates liquid without a mechanical pump.

The centre’s proposed 8,000-square-foot building on Federal Road will house the Inuit Film and Video Archive, a facility where all the old tapes from IBC can be preserved, catalogued, digitized and stored safely.

It will also provide office space and post-production facilities for IBC’s subsidiary, Inuit Communications Systems Ltd., which does contract work with government agencies, businesses, designated Inuit organizations, community organizations, social service agencies, and other non-profit groups and private broadcasters from across Nunavut and the rest of Canada.

The IBC says the new centre should attract local and territorial freelancers, production companies and broadcasters to work in Nunavut.