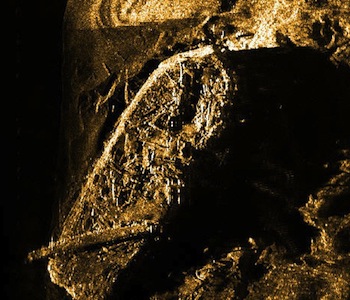 This is how the Investigator, a ship which has been under water for more than 150 years, looks in a sonar image, caught by Parks Canada archeologists off Banks Island in Aulavik National Park. (COURTESY OF PARKS CANADA)

Uncovering Canada’s past connection to the Northwest Passage is a way of demonstrating Canada’s sovereignty in the High Arctic waterway, said Jim Prentice, the federal environment minister and minister for parks, who spoke to Nunatsiaq News July 28 directly from Mercy Bay on the northeastern shore of Banks Island.

A big push is on this summer by Parks Canada to bolster Canada’s claim to the Northwest Passage and High Arctic Islands, with archeologists looking for early explorers’ shipwrecks and surveying sites they visited, like Quttirnipaaq’s Fort Conger.

To personally promote this effort, Prentice was in Aulavik National Park in the Northwest Territories this week. There, Prentice told about witnessing the discovery of a shipwreck from the 1850s by Parks Canada’s underwater archaeology service.

The Investigator, used by Capt. Robert McClure, the British explorer credited with discovering the Northwest Passage, and abandoned in 1853, underlines the “essential heritage” of Canada’s sovereignty in the High Arctic, which it acquired from the UK, Prentice said, describing the eerie image of peering down through the clear water and seeing the Investigator’s floorboards.

In the same way, national parks also demonstrate Canada’s sovereignty in the High Arctic because “our parks are part of what we do as Canadians,” Prentice said during a brief satellite phone interview.

Prentice said he wanted to reassure Nunavummiut that the planned seismic testing waters in Lancaster Sound— part of Parks Canada’s activities in Nunavut this summer— is just part of the “normal process” which leads to an area, like Lancaster Sound, being set aside as a marine conservation area or as a national park.

Parks archeologists located the 36-metre wooden hulk of the Investigator under about 11 metres of water 150 metres offshore — near the place where it was last seen in 1854.

For the moment, Parks Canada is just snapping photos of the wreck with side-scan sonar and deploying remotely operated vehicles from a Zodiac.

So far, its archeologists say the ship is fairly good condition due to the frigid water, and standing upright— but without its masts which would have been snapped off by ice.

Three grave mounds were also found on July 27, the remains of British sailors who died of scurvy in 1853.

From August 6 to 31, Parks Canada is also leading a second archaeological exploration near Gjoa Haven from en board the Canadian Coast Guard ice-breaker Sir Wilfrid Laurier to search for the ships, the Erebus and Terror of the doomed 19th century expedition of Sir John Franklin.