“We have not achieved the goal we were led to believe” 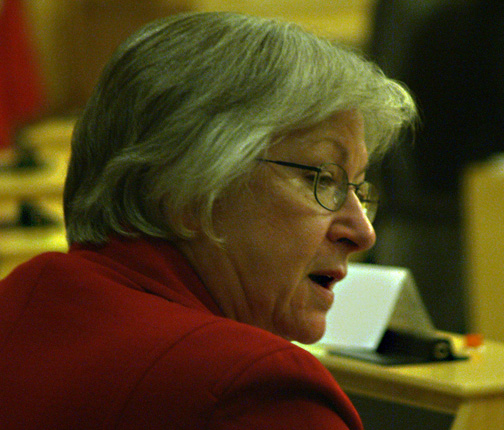 Auditor General Sheila Fraser speaks to members of the government operations and public accounts standing committee in the Nunavut Legislature Sept. 27. Fraser was in Iqaluit to answer questions from MLA about her report on the Government of Nunavut’s human resources situation. (PHOTO BY CHRIS WINDEYER)

The Government of Nunavut’s chances of filling 85 per cent of its jobs with Inuit by 2020 are fading fast, the territory’s deputy minister of human resources acknowledged Sept. 27.

Louise Wasson, who took command of Nunavut’s human resources department two months ago, made the comments during a hearing of the government operations and standing accounts, held to discuss the damning findings of Auditor General Sheila Fraser’s report on the GN’s human resources.

Under questioning from Quttiktuq MLA Ron Elliott, Wasson acknowledged the findings in Fraser’s report that it’s highly doubtful the GN will hit the 85 per cent target.

“The Auditor General has indicated that education and training will take time,” Wasson said. “What we need to do of course is really assess where we are. We have not done that in the past.”

Nunavut will also fall short of its interim goal of filling 56 per cent of government jobs by 2010. Right now, the figure is 52 per cent.

Wasson’s testimony came with a 16-page list of changes the Department of Human Resources will make, which includes promises of a reorganization of the department to be completed by December, 2011.

Wasson said the department will also implement a plan to identify training and educational needs. It has also established a database to keep track of job vacancies that will be expanded to other government departments.

Fraser said the plan looks good on paper. “Only time will really tell how successful this action plan is,” she said.

Akulliq MLA John Ningark expressed exasperation at the government’s failure. He said the 85 per cent target is a matter of basic equality “and we have not achieved that in Nunavut.”

“It is now over 10 years (since Nunavut was created) and we have not achieved the goal we were led to believe,” he said.

“It’s not difficult, it just takes time,” she said. “There’s a very short history in our government.”

“It is something we should be able to stress more: academics as well as cultural pride,” he said.

Fraser said Nunavut’s low levels of education are a major hurdle in the effort to fill government jobs with Inuit workers. Increasingly, employees need at least a bachelor’s degree to qualify for work in government, she said.

The GN, Fraser said, needs to place “more emphasis on students completing high school and going on to post-secondary education.”

“It is very troubling when you see a very low rate of students completing high school.”

Fraser’s report also found it takes the government an average of 318 days to fill a vacant job. Elliott said that delay likely discourages Inuit from entering the public service.

“They need a job, they have a family, they need to be able to provide for that family and they can’t wait for the government to go through the different processes it has to go through,” he said.