One man alleged to have sold weed from bicycle 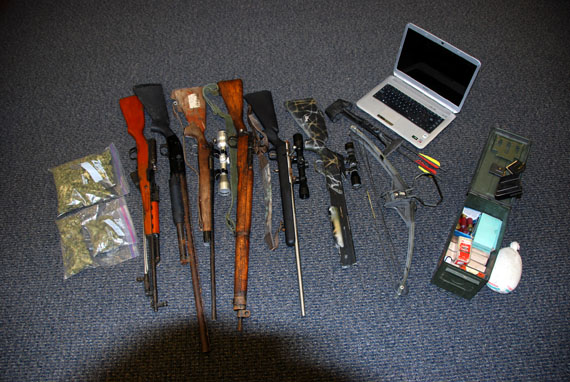 This RCMP photo shows some of the weapons and pre-packaged marijuana seized by police July 22 at house 2657 in Iqaluit. (PHOTO COURTESY OF THE RCMP)

Police arrested three men and one woman over the past week for drug-related offenses in Iqaluit, two of which involve allegations of selling marijuana out in the open.

The RCMP drug section received information July 19 that a local man was selling marijuana on the street in Iqaluit, a news release issued July 28 said.

After finding pre-packaged marijuana and $585, police arrested the man.

Robert Kipanik, 23, now faces charges of possession of marijuana for the purpose of trafficking and several counts of breach of undertaking.

Kipanik pleaded guilty July 21 to a number of outstanding charges, including several relating to the production of counterfeit money and drug trafficking dating from this past March, and another outstanding charge from April of possession of drugs for the purpose of trafficking.

Kipanik received a five-month sentence for those offenses.

Following up on a tip that a man was traveling throughout Iqaluit on a bicycle selling marijuana at various locations,on July 21, members of the RCMP drug section arrested a man they suspected to have purchased marijuana from another man in front of the Northmart store.

The buyer was found in possession of a gram of marijuana and was later released without charges.

The seller was located a short time later. Police arrested him, then found a small amount of pre-packaged marijuana and about $250, the news release said.

Inutsiaq Teemotee, 44, now faces charges released to trafficking in a controlled substance and possession of marijuana for the purpose of trafficking. He has been released from custody.

Teemotee will appear Aug. 26 before the Nunavut Court of Justice.

Acting again on a tip from the public, the RCMP drug section obtained a search warrant to search House 2657 in Iqaluit on July 22.

During their search, investigators located and seized five long guns that were stored unsafely along with hundreds of rounds of ammunition, about 300 grams of marijuana, scales, packaging materials, and other items, the news release said.

Damien Beauregard, 40, and Alice Pallister, 36, now face several charges, related to firearms and possession of marijuana for the purpose of trafficking.

The two are scheduled to appear Aug. 26 in the Nunavut Court of Justice.

Anyone wishing to pass on information in relation to the trafficking of controlled substances or any other crimes can do so anonymously by calling the RCMP Drug Section at 975-4408 or CrimeStoppers at at 1-800-222-8477 (TIPS), the news release reminded.