“A significant amount of liquor was being produced” 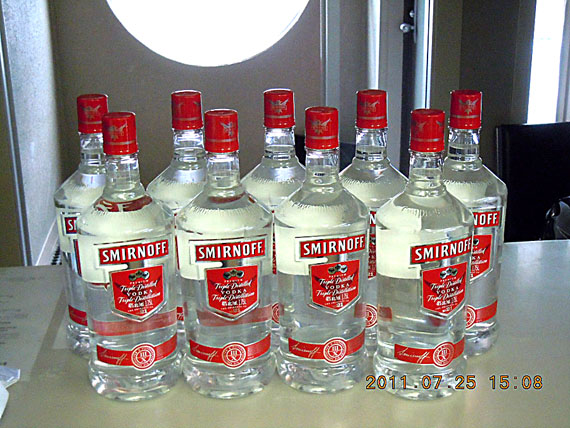 Here’s a look at the bottles of vodka seized this past week by RCMP in Pangnirtung, officially one of Nunavut’s alcohol-restricted community. (PHOTO/ RCMP)

Members of the RCMP in Pangnirtung recently seized illegal liquor and broked up a home brew operation in the community, which is officially dry.

Police seized nine bottles of 1.75 litres of vodka at the airport on July 25 and may look for possible charges to be laid under Section 84 of the Nunavut Liquor Act.

Later on the same day, police executed a search warrant under the Nunavut Liquor Act at House 727-C.

During the search, items were seized which indicate that “a significant amount of liquor was being produced from the residence,” the news release said.

Charges are expected under Section 84 of the Liquor Act, which prohibits “unlawful sale and supply.”

“The RCMP would like to thank the members of the community of Pangnirtung for their assistance in this investigation,” the new release said.

Police are asking people in the community who have knowledge of criminal activity to contact the RCMP, noting that names are kept confidential, and that “you may be eligible for a cash award” for providing information.

Pangirtung’s liquor prohibition regulation, adopted in 1990 — and unchanged in a 2009 plebiscite— says “[that] within 25 km of the building in the Hamlet of Pangnirtung commonly known as the Hamlet Office is declared to be a prohibited area; no person shall transport, purchase or possess liquor within the prohibited area described in section and that “a person who violates any provision of these regulations is guilty of an offence and liable on summary conviction to a fine not exceeding $500 or to imprisonment for a term not exceeding 30 days or to both.”