”The current level of consultation with all affected communities is insufficient” 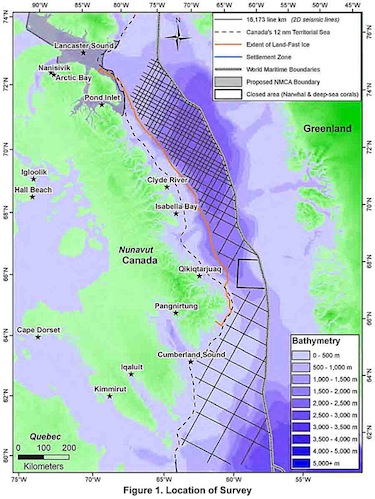 Here’s a map from the Environmental Impact Statement submitted by RPS energy which shows where the company wants to conduct a five-year program of seismic testing, starting next month. (IMAGE/ RPS ENERGY) The waters of Baffin Bay and Davis Strait, seen here, are teeming with marine life and migratory birds — the impact of seismic testing on this wildlife makes many in the Baffin communities nervous about a plan to conduct five seasons of seismic testing there. (PHOTO BY JANE GEORGE)

A proposal to start five years of seismic testing in the Davis Strait and Baffin Bay next month, outside the Nunavut land claim settlement area, has sparked opposition from people in Clyde River and Pond Inlet, the Arctic Fishery Alliance, the Baffin Fisheries Coalition and the Qikiqtani Inuit Association, which say the program is ill-planned and promoted.

They’ve slammed the quality of consultation and information offered by the RPS Energy, an international consultant and management group based in Norway acting on behalf of the proponents.

They’re also skeptical about the company’s claims that the sound waves produced by seismic tests will leave marine life unharmed.

Their feedback can be found in letters and comments filed with the National Energy Board, the federal agency that will decide whether to grant RPS Energy the authorization it needs to proceed.

Because all the seismic testing will occur outside Canada’s 12-nautical-mile boundary, the NEB — not the Nunavut Impact Review Board — gets to decide whether to grant RPS Energy that authorization.

RPS Energy appears to be doing the work on behalf of private clients, likely oil and gas firms. In 2007 and 2008, the company did similar work in the same area.

At a meeting last month in Clyde River between company representatives and the community, there was “clear and strong public opposition” to the project, according to documents from the NEB website.

The May 26 meeting was not a “consultation,” but rather a “this is what will happen” information session, said Dr. Shari Gearheard, a research scientist who lives in Clyde River.

“The company representative said as much, “we’re here to tell you what’s going to happen,” she writes.

Moreover, the presentation’s slides were not prepared in Inuktitut, maps were unreadable and diagrams were not made to scale.

“Such poor information does not allow one to be informed in order to make a judgment or decision. For example they could not provide any information about potential impacts to marine mammals as a results of noise from the air guns. This information is readily available online, but the representatives claimed that this information was not known, available, or at least they had no idea,” she writes.

None of the 30 people at the meeting supported the project and 28 of them signed a petition asking that the project not move ahead.

The QIA, which gathered feedback from its Community Lands and Resources Committees, agrees the “current level of consultation with all affected communities is insufficient,” in a letter sent to the NEB June 13 by its director of lands and resources, Robert St. Eloi.

And there’s also a lack of mitigation measures and not enough traditional knowledge in the company’s environmental impact statement, the QIA said.

The QIA wants to see a full-scale regional assessment: “all stakeholders involved in oil and gas development must set up a process to educate the affected communities,” St. Eloi writes.

The QIA wants to see public meetings to address community concerns and a full mitigation plan.

Until that’s done, the QIA doesn’t want to see the NEB grant authorization.

As for RPS Energy, its 120-page EIS, delivered to the energy board in April, says if the project doesn’t move ahead, there will still be damage to the environment: from ice breakers, cargo vessels, cruise ships, and other research vessels, waste materials, sedimentation, fall-out of atmospheric pollutants, discharge of ballast.

And marine life will still live in a noisy environment full of “cracking and breaking pack ice.”

A “no-go” would set back interest in the area, it says, because geologists will lack the information required to map the sub-surface and assess its oil and gas potential.

That will affect the future of more subsurface exploration and drilling programs, resulting “in the removal of future potential business, royalty, and tax revenue sources and the data would not exist for future knowledge and research,” the EIS says.

Starting this July, RPS Energy wants to send out the MV Sanco Spirit, a private research vessel, to tow a number of air guns around. These will send sound waves down to depths of six to 10 metres below the sea surface toward the seabed.

Receivers spaced out along “streamers,” six to 10 kilometres in length, towed behind the ship, will record the sounds that bounce back.

By the kind of echoes that are returned, geologists can determine what’s under the seafloor.

This year’s survey would wrap up in November, depending on the location, weather conditions, and vessel availability, the EIS says.

All interaction with marine mammals of any designation will be kept to a minimum, it says, and “it is unlikely that any individual will be measurably impacted by the program.”

The survey is to pass 28 kilometres outside the Niginganiq National Wildlife Area, near Clyde River.

While acknowledging “the low hearing sensitivity of baleen whales,” the company says the additional noise generated as a result of the present proposed seismic survey activities will be minimal: they could move away but would be “likely” to return after several hours.

Marine mammals watchers will ensure there are no whales or seals within 500 metres from the sound source, it says.

As for fish, there could be some “mortality of eggs or larvae.” Although the catch rate “can be affected,” the seismic testing wouldn’t “affect any critical or unique spawning grounds.”

To scare birds marine life away, the plan is to ramp up the sound pulses gradually.

Fortunately, there are no lobsters off the Baffin Island. The RPS acknowledges that adult American lobsters may experience physiological effects from intense seismic sound pressure, it says.

“American lobsters are not found in the proposed seismic study area and consequently will not be potentially impacted by seismic operations.”

Removing its nets out of the way of a seismic-testing ship would require “considerable effort and loss of fishing time,” says its letter to the NEB.

The alliance, the Baffin Fisheries Coalition and communities are already raising the need for compensation if the project moves ahead.

The Government of Nunavut has also waded in, with comments on the project, saying any development within and near Nunavut will include “exemplary consultation with Nunavummiut.”