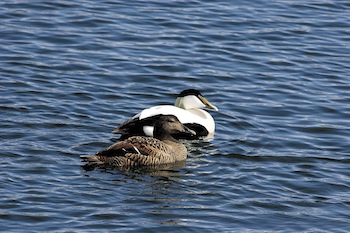 People living in Aupaluk say they won’t see any young eider ducks this year due to the destruction of eggs and nests in a nesting area near the community. (FILE PHOTO)

During regular community report from Aupaluk, a community on Nunavik’s Ungava Bay, a correspondent stated that shooters had destroyed eider duck eggs and nests.

As a result, he said he expected to see no young ducklings being born or raised this summer in that nesting area.

Not only is this story sad, but it is also illegal, said Mark Mills, a wildlife protection officer with Environment Canada in Quebec City.

The Migratory Bird Convention Act also calls for fines up to $300,000 in the case of a summary conviction and up to one million dollars for an indictable offense, Mills said.

There are about 200,000 eiders in Nunavik. Down is collected in Nunavik from about 75,000 to 125,000 nests along the south coast of Hudson Strait and the west coast of Ungava Bay.

Inuit are also allowed to hunt eider ducks and collect eggs to eat — but the offenses prohibiting the destruction of nests and damage to eggs listed under the Migratory Birds Act still apply.

Every year in Canada, charges are laid against people who commit these offenses, Mills said, although he could not offer a number.

This past May a 16-year old from Alberta was charged with destroying the nest of a Canada goose.

Mills urged Nunavimmiut with knowledge of the incident in Aupaluk to call with a formal complaint, which could lead to the launching of an investigation.

“It’s illegal and they do have the responsibility to report it,” he said.

In Quebec, the provincial wildlife department, la Ministère de l’environnement et de la faune, has the mandate to enforce federal wildlife regulations — however a call by Nunatsiaq News to the office in Kuujjuaq was referred to the Quebec City office of Environment Canada.