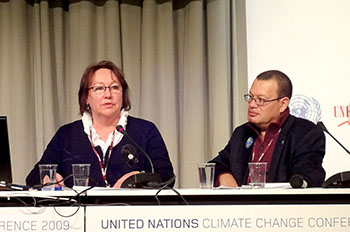 Human rights need to be at the heart of the world’s new climate change deal, says Inuit activist Sheila Watt-Cloutier, shown here with Ronny Juneau, the Seychelles ambassador to United Nations, at a Dec. 10 side event to the U.N. climate change conference in Copenhagen. (PHOTO BY JANE GEORGE)

COPENHAGEN — Indigenous leaders from the Arctic, Africa and small island nations are using International Human Rights Day to call for human rights to be made part of a new global climate pact.

A panel of the indigenous leaders gathered Dec. 10 at a conference side event in Copenhagen’s Bella Centre to make that case.

The panelists also called for a climate change agreement that includes a stronger acknowledgement of human rights and more protections for basic human rights, such as the right to freedom, equality, and adequate living conditions.

The new climate deal, to be hammered out between now and Dec. 18, should focus on people, because climate change is more than the environment and protecting “furry animals,” said activist Sheila Watt-Cloutier of Iqaluit.

“Not everyone relates to science, but you can relate to the human rights,” Watt-Cloutier said.

While serving as president of the Inuit Circumpolar Council, Watt-Cloutier promoted the link between climate change and human rights — what she calls the “human face” of climate change.

Watt-Cloutier filed a petition with the Inter-American Commission on Human Rights the United States in 2005, saying the U.S. had violated the human rights of Inuit with its climate-warming activities.

The petition said climate change threatens the rights of Inuit to use and enjoy their traditional lands and personal property, their rights to health and life, to residence and movement and to their livelihood.

In the beginning, human rights were shoved to the backburner in the climate change debate in the Seychelles, admitted Ronny Juneau, the Seychelles ambassador to United Nations, who participated in the panel discussion with Watt-Cloutier.

The Pacific Ocean nation of 115 islands has been lobbying for higher cuts to greenhouse gas emissions to fend off rising sea levels.

But it’s become more clear that if “you melt, we sink” due to climate change — and now the human impact of climate change, and the need for more solidarity has become apparent, Jumeau said.

An urgent question for the Seychelles is what will happen to its citizens when they must abandon their homeland, become stateless and are “environmentally displaced.”

At least 60 per cent of the Seychelles’ islands would be threatened by any sea level rise.

Both its port and airport are built on reclaimed land, which would be severely impacted by a rise in sea level. Most of its coral islands would disappear under water, and thousands of people would have to leave their homes.

The climate change agreement must account for this kind of climate crisis, Jumeau said.

The panelists want the agreement to offer more money for mitigation and adaptation assistance to help those affected by climate change to deal with its impacts.

They also want the agreement to recognize areas dependent on ice and snow as being vulnerable to climate change, similarly to the low-lying countries, arid areas and developing countries with fragile mountainous systems, which are already mentioned.

The panelists asked everyone in the audience to lobby a delegate at the conference so that the final text of the agreement contains more and stronger human rights protections.

The panelists on the human rights aspect of climate change gained two new supporters, Ashley Tufts of Iqaluit and Janice Grey of Aupaluk.

The two students, who are part of Canada’s youth delegation at the conference, say the linkages between human rights and climate change were brought home by the image that “while our world is melting, they are drowning.”