“Hats off to the hamlet of Arviat” 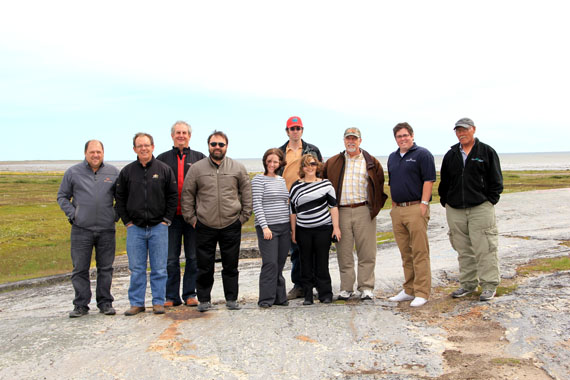 Do you enjoy working with machines and would you like a job in mining and exploration?

If you’re lucky enough to live in the Nunavut community of Arviat, you’ll be able to learn how to operate a diamond drill during a 10-week diamond driller’s training program, Nunavut’s first, which starts up there this September.

Bob Leonard, the mayor of Arviat, announced July 25 that the training program will see 12 Arviat students learning how to be diamond drillers.

“The equation seems pretty simple,” Leonard said in a news release. “There is a big demand for diamond drillers to support mining exploration and development in the region. There is a huge and willing labour force in the Kivalliq. We already have over 50 people from Arviat working in the mining industry, but we have many more looking for work. This training course will provide the skills residents need to get these jobs.”

A second diamond drilling course is scheduled for January 2012. This course will be open to people who live in other Kivalliq communities.

While the training program’s “immediate goal” is to provide employment opportunities to the residents of Arviat and other Kivalliq communities, Leonard said “we believe that this program will be a model for similar programs here and elsewhere in Nunavut.”

The training program will combine classroom learning with hands-on training on a diamond drill.

The program’s budget includes $1 million for equipment and tools and about $250,000 for class instruction, and its partners include the Government of Nunavut, Agnico-Eagle Mines Ltd., Orbit Garant Drilling Services, Boart Longyear Canada, the Kivalliq Mine Training Society, Nunavut Arctic College, Northern College, the Kivalliq Inuit Association, and the Contaminants Remediation Training Organization of Canada.

“This is another example of the Government of Nunavut following its Tamapta mandate,” said Peter Tatpuna, Nunavut’s economic development minister, whose department gave money to the program, in the news release. “We hope this funding will support community-based and sustainable economies. We want more Nunavummiut in the work force and this training is a way to do it.”

The program will be delivered by Ontario’s Northern College, in collaboration with the NAC, which will provide a classroom, tools and student support.

The Hamlet of Arviat is providing a two-bay garage for the drill and other equipment, and Agnico-Eagle, Orbit Garant and Boart Longyear will offer expert support to the program and have committed to hiring graduates on a priority basis, the news release said.

An Inuit assistant instructor experienced in diamond drilling will help to prepare the students for work.

“Hats off to the hamlet of Arviat for gathering all the partners together,” said Graeme Dargo, senior co-ordinator of economic development in Nunavut for Agnico-Eagle Mines Ltd..

With the expense of the outfitting and offering the program, it’s unlikely that any one of the partners could have organized it alone, he told Nunatsiaq News.

At Agnico-Eagle’s Nunavut properties, which include the Meadowbank gold mine near Baker Lake, there are 20 diamond drills in operation. These require about 40 diamond drillers.

To be a good driller, Dargo said it’s important to be in good physical shape and enjoy working with machines.

Druing the average 12 hour-a-day operation of a diamond drill, anything can happen, he said: the drills, which run on generators, require constant surveillance and maintenance.

Much of running diamond drills, which operate outside, sometimes in the low temperatures of late winter, revolves around maintaining safety, he said.

The Kivalliq community of 2,500 now sends 50 workers to the Meadowbank gold mine. That’s about a fifth of the entire Inuit workforce at the mine.

“That hunger comes from an everyday reality for people — poverty, not being able to feed their kids properly, not to be able to afford a snowmobile. There’s a lot of guys who would like to go forward, but they can’t afford it,” he said.

“A lot of people are understanding that training means a better chance for a job.”