Tootoo takes over as Speaker in Nunavut legislature

“I needed to make a change” 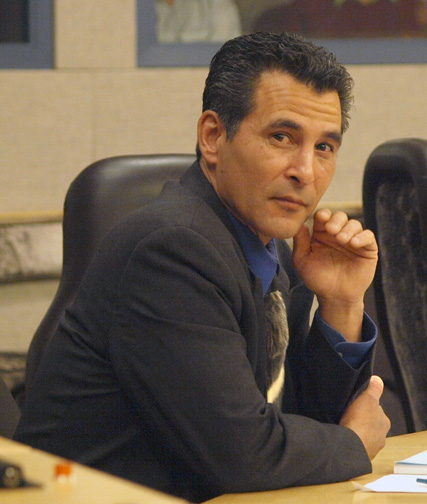 Iqaluit Centre MLA Hunter Tootoo awaits the start of voting for the new Speaker of Nunavut’s Legislative Assembly May 31. Tootoo, who resigned from cabinet to seek the Speaker’s job, defeated Akulliq MLA John Ningark in a secret-ballot vote. (PHOTO BY CHRIS WINDEYER)

Hunter Tootoo is the new Speaker of Nunavut’s Legislative Assembly.

Tootoo, the MLA for Iqaluit Centre, stepped down May 31 from his cabinet job as minister of education and human resources after being nominated by Nattilik MLA Jeannie Ugyuk.

He defeated Akulliq MLA John Ningark in a single ballot.

“The last six months have been very challenging personally and I needed to make a change,” Tootoo said in an interview.

Tootoo had to resign from cabinet to be eligible to contest the Speaker’s job. He said he was ready to leave cabinet regardless of the outcome of Tuesday’s vote.

“It’s been a real honour and pleasure serving in cabinet,” he said.

Tootoo takes over the Speaker’s chair from former Iqaluit West MLA Paul Okalik, who resigned in April to run for the federal Liberal party in the May 2 federal election. Okalik lost that race to Conservative cabinet minister Leona Aglukkaq.

“I think it would only be fair, and we decided at full caucus that we would wait until fall [to choose a new cabinet minister],” Aariak said.

Until then, Aariak will handle the education portfolio, while Arviat MLA Dan Shewchuk will look after the Department of Human Resources, Aariak announced later on May 21.

Tagak Curley, the MLA from Rankin Inlet North, will assume responsibility for the Workers Safety and Compensation Commission.

The premier thanked Tootoo for his work in cabinet.

“He’s been at the Legislative Assembly right from the beginning and he has contributed very much from both sides, as a regular member… and as a minister as well.

“His contributions to cabinet will be missed very much.”

Tootoo is the last MLA remaining from Nunavut’s first legislative assembly in 1999 after Tununiq MLA James Arvaluk resigned in early May for health reasons.

In 2004 and 2008 he won reelection easily, with 45 and 62 per cent of the vote respectively. He was voted into cabinet in 2008 and initially served as housing minister and education minister.

Last fall, in the wake of the Nunavut Housing Corporation fiasco that cost the government $110 million, Okalik and South Baffin MLA Fred Schell floated a non-confidence motion against Tootoo.

That motion never went to a vote, but Tootoo was later shuffled to human resources.