Experts at Copenhagen say Arctic warming may be irreversible 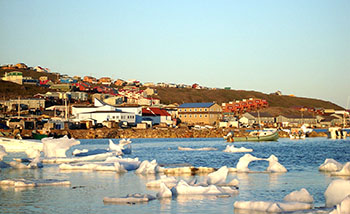 The loss of multiyear ice in the Arctic may have gone past the point where even aggressive cuts to greenhouse gas emissions in the rest of the world can stop the runaway melting of sea ice and Greenland’s huge ice sheet. (PHOTO BY JANE GEORGE) 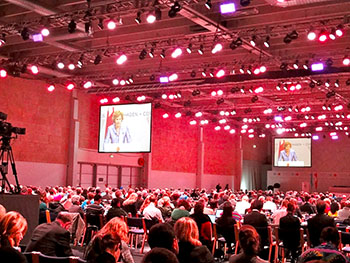 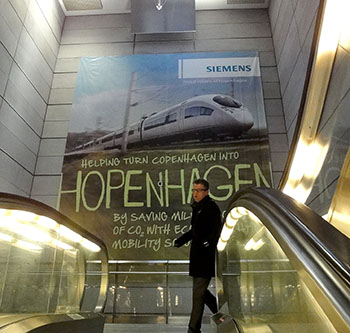 As this poster in a metro station shows, Copenhagen is calling itself “Hopenhagen” for the next two weeks — reflecting hopes that the United Nations climate change conference meeting in the city will come up with a global plan to deal with climate change. (PHOTO BY JANE GEORGE)

The Arctic’s overall temperature has already risen by 3 C — much more than the half of a degree rise experienced globally.

That’s the un-pretty picture painted by the scientists from the United States, who shared their most recent information about the Arctic’s melting ice at the United Nations climate change meeting in Copenhagen.

The ice melt has gone so far that turning back to Arctic’s cold environment of the past may be “very hard,” the scientists said at the event, called “The Arctic: one of the earth’s most rapidly warming regions.”

The scientists didn’t want to use the word “tipping point” to describe this situation of no return for the planet.

But they said it would be impossible to turn around the warming processes that could leave the Arctic with no summer sea ice by 2050 at the latest, and with an ocean incapable of sustaining any marine life, from clams to whales.

As the scientists spoke to a sparse audience in the U.S. government’s meeting room on the opening morning of the climate change conference, an overflow crowd watched Dr. Rajendra Pachauri, chairman of the United Nations’s Intergovernmental Panel on Climate Change, defend the science in the IPCC’s fourth assessment report in 2007, which also warned of disappearing ice.

To keep climate change in check, Denmark’s environment minister, Connie Hedegaard, urged the 15,000 delegates at the UN climate change to compromise, agree, come up with concrete solutions and “mark this meeting in history.”

“For the next two weeks, Copenhagen will be Hopenhagen,” Danish Prime Minister Lars Lokke Rasmussen said. “At the end of the next two weeks we must deliver on the hopes that the world has placed with us. Be ambitious, creative and visionary. A deal is within reach.”

But this deal may be too little too late to change the meltdown of the Arctic, said Dr. John Overland, who is the lead author of a new study on snow, water, ice and permafrost in the Arctic.

Overland said he’s shocked and surprised at the extent of the melting and thinning of Arctic sea ice.

Its reduced volume, which is about 25 per cent of what it once was, has outstripped even the most pessimistic scientific predictions, he said.

The Arctic has “reached a place where it’s very difficult to go back to the previous condition,” Overland said, although the process could be slowed down by action to limit climate-warming greenhouse gasses.

The continuing loss of sea ice cover loss wasn’t as profound in 2009 as in 2008, Overland said, but this year’s sea ice re-formed later in the autumn.

That finding wouldn’t surprise Jupi Angootealuk and his uncle, Jimmy Nakoolak of Coral Harbour whose mid-November polar bear hunting trip ended in a near-disaster when the ice they were on broke up.

Overland said he flew north of Alaska recently and saw no ice, only empty water, at a time of year when ice should be forming.

The reason? Every year when there’s been less ice, the open water absorbs more heat, and this has led to high water temperatures, less of the multiyear ice that used to provide stability and the creation of what Overland calls” a new reservoir of Arctic heat.”

“The Arctic is really entering a new climate state and sea ice [melt] is the culprit,” Overland said.

But a turnaround for sea ice doesn’t look favorable— even if greenhouse gas emissions go down.

The same goes for the speed-up in the melting of Greenland’s ice sheet, bleakly described by Dr. Wahleed Abdalati, a scientist with the University of Colorado who has spent much of his career tracking this shrinkage with NASA satellites.

Judging from diagrams Abdalati flashed on a screen, ice from its huge ice cap appears flows out of Greenland’s glaciers the way water flows out of a bathtub after the plug is pulled.

Ilulissat’s glacier has lost twice as much ice in the past nine years as during the previous 100 years — and when the ice hits warmer water, it melts many times faster than before — a phenomenon Abdalati said he finds astonishing, fascinating and depressing.

Stopping this accelerating melt is problem because “the more it [melting] happens, the more it wants to happen,” Abdalati said.

“We’re in a new place and the world’s ice is rapidly decreasing,” a place where “we can count on rising seas,” Abdalati said, showing a map of what the world will look like after sea levels rise by one metre.

If that sounds bad, the acidification of Arctic Ocean sounds even worse because it’s happening now.

The surface waters of Arctic Ocean, the “most vulnerable ocean in the world,” are already corrosively acidic during the ice-free season, said Dr. Richard Feely, an oceanographer with the Pacific Marine Environmental Laboratory.

That’s also due to ice melting. The melting ice and reduced cover leads to changes in the chemical balance of the ocean’s water and makes it more acidic, so it eats away at the shells of clam and other tiny marine life.

As the Arctic sea ice cover continues to decrease, the seawater will become more corrosive, rippling through the food chain, making it hard for fish to find food or for whales to navigate by sound.

The acidification of the Arctic Ocean will “very very difficult” to turn around, Feely said — and it’s likely to affect all the world’s oceans by 2020, he said.

To better understand the decline of ice in the Arctic, scientists say they are ramping up their research and monitoring.

On Dec. 14, they’ll release the first part of a study on snow, water, ice and permafrost in the Arctic, a project of the Arctic Council.

• On eve of global climate summit, it’s a street party