Thousands of readers followed our online coverage of the Aug. 20 crash in Resolute Bay 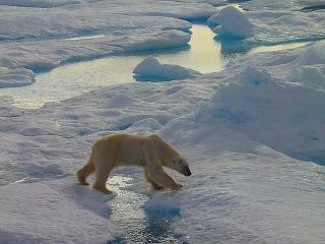 An Oct. 27 order-in-council from the federal government, published Nov. 9, adds the polar bear to a list of Canada’s species of special concern. (FILE PHOTO) 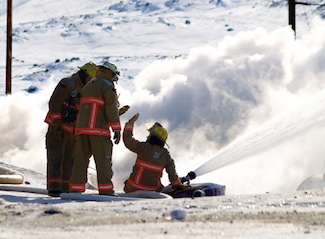 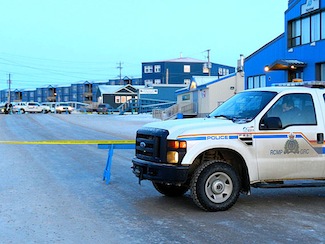 Police continued to block access to a stretch of Nipisa Street in front of the Nunatsiaq News office on the morning of Nov. 23, as they continued to investigate a shooting incident that left two men injured. (FILE PHOTO) 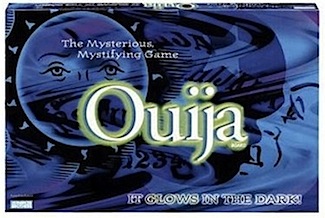 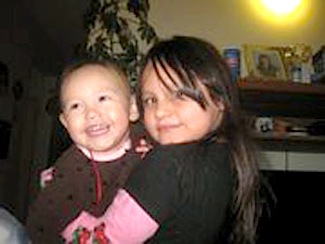 Two-year-old Ailyah Degrasse, left and her sister Alexandra Degrasse, 7 were found dead alongside their mother June 7. The three were buried in Pond Inlet. (FACEBOOK PHOTO REPRODUCED WITH PERMISSION OF MICAH ARREAK) 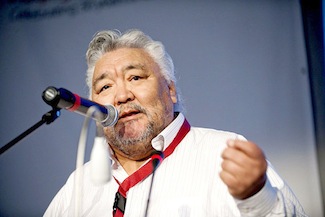 Jose Kusugak in July 2010 at the Inuit Circumpolar Council general assembly in Nuuk, delivers a personal message. Having been recently diagnosed with terminal bladder cancer, Kusugak urged all Inuit to get medical check-ups, and he asked all delegates to think of him and his battle with cancer. (PHOTO BY LEIFF JOSEFSEN, SERMITSIAQ) 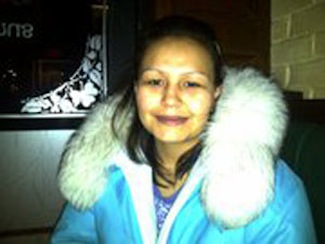 Sula Enuaraq, 29, was found dead in her Iqaluit home June 7. Her mother described her as an upright and likeable person, who was a dedicated mother to her two young daughters. (FACEBOOK PHOTO REPRODUCED WITH PERMISSION OF MICAH ARREAK) 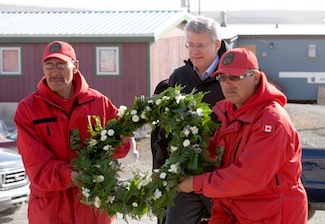 Prime Minister Stephen Harper is joined by members of the Canadian Rangers as he prepares to present a wreath to the Tabitha Mullin, mayor of Resolute Bay, on Aug. 23. (PHOTO BY DEB RANSOM)

Tales of loss and frustration attracted more readers to Nunatsiaqonline.ca than any other type of story in 2011.

Based on statistics generated by Google Analytics, the respected internet traffic measurement service, we’re able to list the online stories that drew the greatest number of page views, as well unique page views in 2011.

Here are the top 10 online stories that in 2011 attracted readers like you to Nunatsiaqonline.ca:

People in Resolute Bay and at the Polar Continental Shelf Project were stunned, the day after a Boeing 737-200C slammed into a hillside near the community’s airport. The military’s Operation Nanook ended abruptly, and many were mourning the deaths of co-workers.

Planned visits by Governor General David Johnston and Prime Minister Stephen Harper to Resolute Bay continued, but they kept the focus on grief instead of celebrating Canadian sovereignty in the Arctic.

The Transportation Safety Board’s investigation into the crash should be ready sometime in 2012.

• The violent deaths of four Iqaluit residents, including a young mother and her two children, shook Iqaluit and the entire territory in early June.

Sylvain Degrasse, 44, was found dead in the Iqaluit cemetery June 7 with a rifle across his chest.

Shortly afterwards, police found the bodies of his wife, Sula Enuaraq and their two young daughters, Alexandra, 7, and Ailyah, 2, in the family’s Tundra Valley home.

Police concluded that Degrasse killed his family, then turned a gun on himself.

• Jose Kusugak, who, over his lifetime, led many Nunavut and national Inuit organizations, died in January at age 60.

“Every situation has a funny side to it. We owe it to our soul and spirit to laugh and see the sunny side of life,” he said during his final illness.

Kusugak was later honoured posthumously with the Order of Nunavut.

• A Rankin Inlet woman, Lucy Wiebe, said she was shocked to see a ouija board for sale in the local Northern store.

Weibe said glow-in-the-dark Ouija boards have been linked in Rankin Inlet to teen suicides. “They’re no good. People may think they’re for fun games, but they’re for real,” Weibe said.

The games were removed from the store’s shelves.

• The sudden death of Adlair Aviation Ltd. president Paul Laserich, 52, Nov. 19 in Yellowknife came only 11 days before Adlair’s final air ambulance flight for the Government of Nunavut was scheduled to depart on Nov. 30.

Family members say Laserich, who was raised in Cambridge Bay, was frustrated by a GN decision to transfer its Kitikmeot medevac contract from Adlair to Aqsaqniq Airways Ltd., a private company in Taloyoak.

After the GN awarded that contract, which Adlair held for more than 20 years, Adlair appealed the decision, but lost the appeal shortly before Laserich’s death.

Ottawa Police Service took over the investigation into the early-morning exchange of gunfire that injured two men, one of whom carried a firearm, and one of whom had been sleeping in his staff house at the former candy store building.

Arthur Wilson, 24, a recent hire at Arctic Ventures, was hit by a stray shot.

“I was two inches away from death. I can’t sit on a couch all day and fret over it,” Wilson said Nov. 24.

The Ottawa Police Service has yet to reveal who fired the shot that injured Wilson.

• An ugly racism beef erupted within an Ottawa Inuit organization. Ex-boss Morgan Hare, 54, sued Tungasuvvingat Inuit, alleging discrimination. In this suit, Hare alleged the organization dumped him from his job this past June because he’s a member of the wrong race.

• An apartment fire on Iqaluit’s Road to Nowhere on March 24 “was an extremely aggressive fire,” said firefighters who spent more than eight hours battling the blaze, which levelled a three-story apartment building.

As many as 60 Iqalummiut remained homeless after the devastating fire.

• The federal government added the polar bear to the Special at Risk Act’s “special concern” list on Nov. 9, which means a new national management plan must be developed by 2014 for polar bears. The Nunavut Wildlife Management Board, the Nunavik Marine Region Wildlife Board and the Government of Nunavut were against the listing.

• People in Nunavik voted no to the Nunavik Regional Government and questioned Plan Nord, Quebec’s scheme to develop the northern portion of the province.

Only one in three voters said “yes” to a future Nunavik Regional Government in an April 27 referendum. After months of heated debate on the new governance model, only 1,400 voters, or 34 per cent, say “yes.” Of the registered eligible voters only 17.76 per cent voted “yes.” That final tally fell well below the number of “yes” votes required to approve the final agreement.

Many in Nunavik also demanded better information on Plan Nord, and backed away from supporting Plan Nord — unless it proceeds with the approval of Inuit in Nunavik.