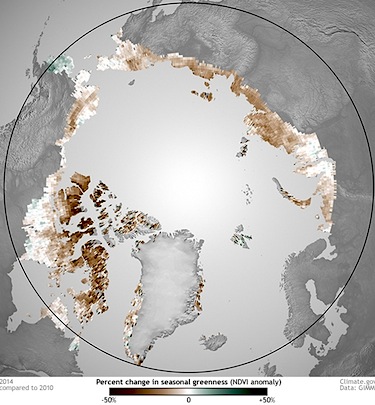 Over the past 30 years, tundra vegetation has greened up as the Arctic has warmed. But in recent years that trend has reversed. As the Arctic has warmed, satellites reveal it has also been “greening up” overall, a sign that vegetation has generally become leafier or denser. But in recent years, the tundra has been “browning down,” for reasons that are still to be explained, NOAA says. (IMAGE COURTESY OF NOAA) 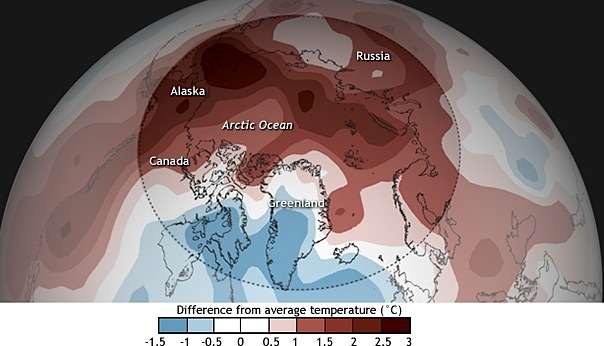 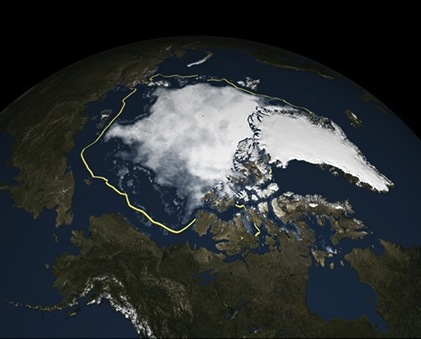 Here’s a map of Arctic sea ice on Sept. 11, 2015, the date it reached its fourth-lowest extent in the satellite record. (IMAGE COURTESY OF NOAA)

This year the Arctic got warmer — that’s the latest from 72 scientists in 11 countries who weighed in on the 2015 Arctic Report Card from the National Oceanic and Atmospheric Administration, released Dec. 15.

But NOAA’s report card says that the average annual air temperature over land areas in the Arctic between October 2014 and September 2015 was 1.3 degrees C above average, the highest since 1900.

This represents a 2.9 C increase since the beginning of the 20th century.

In 2014, the NOAA said Arctic air temperatures were increasing more than twice as fast as the global average.

As well, sea surface temperatures in August 2015 off the west coast of Greenland in eastern Baffin Bay were up to 4 C warmer than the 1982 to 2010 August mean.

The report’s scientists also found that:

• Arctic-wide June snow extent has declined 18 per cent per decade since 1979;

• the melt season was 30 to 40 days longer than average in western, northwestern and northeastern Greenland; and,

“The decline in sea ice is dramatically changing the habitat for walruses, increasing the use of land-based haul outs that are more dangerous for the young,” NOAA said.

The report card’s contributing scientists also found tundra vegetation was no longer “greening” over past two to four years — but “browning.”

“These tundra vegetation changes have implications for numerous aspects of Arctic ecosystems,” NOAA said, without specifying whether these implications would be positive or negative.

You can read the 2015 Arctic Report Card here.