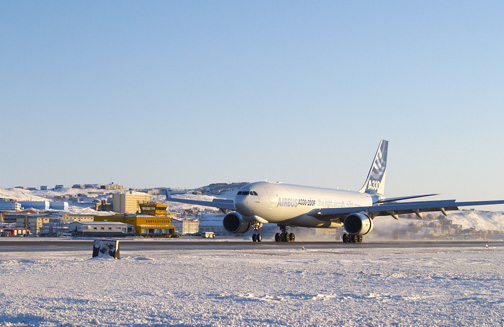 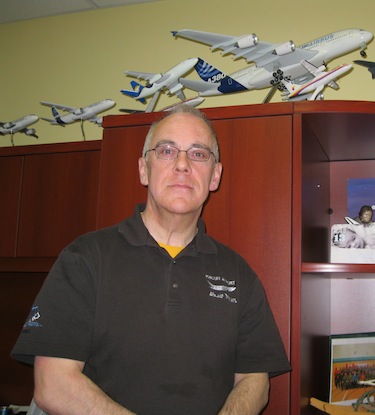 Iqaluit Mayor John Graham will be heading up a delegation to the Paris Air Show, June 17 to June 23, promoting the City of Iqaluit as the “world’s premiere cold-weather test centre.” As former manager of Iqaluit Airport, Graham helped draw aircraft giants Boeing and Airbus to the city to test their newest planes, starting in 1996. He keeps several models of such planes in his office as an emblem of the city’s long history in aviation, dating back to the town’s beginnings as an air force base in World War II. (PHOTO BY PETER VARGA)

Iqaluit Mayor John Graham will put his expertise as former airport manager to work for the Nunavut capital again this summer, when he heads up a delegation to the Paris Air Show.

He’s done that often in the past but this time he’ll do it in the name of the City of Iqaluit, with a delegation organized by city council’s economic development committee.

This delegation is a first for the city. Representatives from territorial and federal governments have promoted the Iqaluit airport in past years, but had no plans to do so in 2013.

“We want to keep Iqaluit front and foremost in the customer’s mind,” Graham said.

As airport manager from 1996 to 2012, Graham hosted cold-weather test runs of several new models of aircraft by Boeing and Airbus, starting with the Boeing 777 in 1996.

His presence at the Paris show in 2005, 2007 and 2009 helped keep Iqaluit on the radar of large and medium-sized manufacturers from Europe and North America.

The main purpose of his first visit to the show in 2005 was largely to persuade Airbus to test its giant two-level A380 at the airport.

“That was my goal,” he said. “It had never flown to North America. And I thought it would be a major milestone for Iqaluit airport, for Nunavut and actually in Canadian aviation history.”

Aircraft testing brings much business to the city during such missions and offers a rare chance to promote Iqaluit on the global stage, said Graham, which is the city’s prime motivation.

Even so, he is quick to point out that the idea of attending the show was not his — but the work of the city’s economic development committee and its chairman, Coun. Mark Morrissey.

The idea took root when Airbus was in the city earlier this year to test a military plane and a new engine on the A380. On meeting members of the project, Morrissey and the mayor found “there is tremendous economic spin-off to the community, as a general observation,” said Graham.

The delegates estimated their team typically spent up to half a million dollars on such large missions in total, including all routine costs to run the mission at the airport as well as accommodation for mission members.

“As a municipal corporation, the city receives nothing from these guys landing,” said Morrissey. “But there’s a clear benefit to the local businesses.”

Morrissey and the city’s development committee found a study from 2005, which estimated that every dollar spent on promoting Iqaluit at the Paris Air Show netted a return of $30 in business to the city.

Attracting that business takes consistent effort, said Morrissey, and in a year when the territorial government has not lined up a delegation as in the past, the city stands to benefit from a mayor with experience doing it.

“I don’t think he had planned on being part of it,” Morrissey laughed. “But to us (city council) it just made absolute sense. He’s been there, he’s done it. He’s got the existing relationship with these companies — so we wanted to use that.”

Graham and Morrissey will be part of a delegation that will include two members of Frobisher Bay Touchdown Services, who represent the local aerospace industry. Also expected are two representatives of the territorial government.

As well maintain the interest of Boeing and Airbus in Iqaluit, this year’s goal is to draw smaller firms to the territorial capital. These include manufacturers of civilian and military aircraft such as Eurocopter, Dassault Aviation of France, Embraer from Brazil, and Canada’s own Bombardier.

“An important part here is to maintain the competitive advantage that we currently have,” said Morrissey.

Airport installations throughout the world are also vying for test contracts, he said, including sites in Sweden, Russia, and the United States, not to mention others closer to home, in Manitoba and Labrador.

A city that owes its existence to the creation of an airbase in the Second World War seems a natural fit. Its location, selected by the U.S. Air Force at the time, was purposefully chosen as a refuelling point on the route to Europe from North America.

To this day it remains relatively close to large aerospace industries abroad, said Graham, and on the pathways of major transcontinental air routes.

Besides the key advantage of its predictable cold, dry climate, which suits well for avionics testing, Iqaluit is within five hours’ flying distance from France – the site of much of Europe’s aerospace industry. It is also on the “High North Atlantic Track,” said Graham – the pathway taken to Europe from major North American cities, and to Asia from cities on the Eastern Seaboard.

“It’s a true polar route,” he said. “Like from New York to New Delhi – right across the North Pole.”

Hosted at Le Bourget Airport, just north of the French capital, the Paris Air Show is the world’s oldest and largest such event. This year’s 50th edition, June 17 to 23, will welcome 151,000 trade visitors and more than 2,100 international exhibitors.

City council estimates the event will cost the city $40,000, most of which covers the city’s two representatives, and the city’s booth at the show will be subsidized by the Aerospace Industries Association of Canada. The city is also working with the Department of Foreign Affairs, Industry and Trade to arrange meetings with manufacturers and trade commissioners of other countries.

Aircraft testing has proven to be a sustainable industry for the city so far, said Graham — not to mention “a welcome shot in the arm for the economy in the middle of the winter.”