“No one was hurt, and that is just amazing” 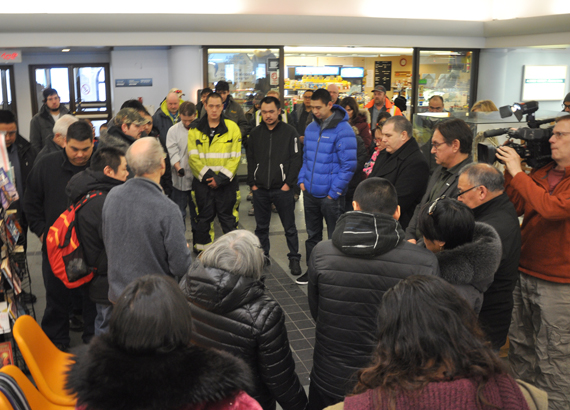 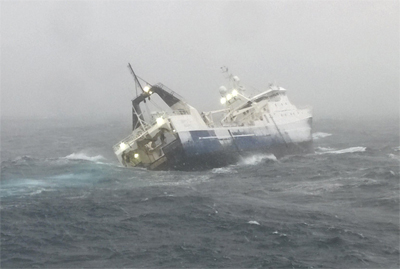 The Iqaluit airport waiting area was crowded with people, but remained quiet the afternoon of Feb. 26 — except for the sobs of a woman crying into her son’s shoulder.

That man, this woman’s son, was one of seven crew members working aboard the Qikiqtaaluk Fisheries Corp.’s MV Saputi in Davis Strait Feb. 22, when the vessel’s hull struck ice and began taking on water.

After a harrowing journey to Nuuk, Greenland, and then a flight home three days later, the crew’s arrival in Iqaluit was tearful, but joyful.

Crew member Andy Kopalie, 23, who held his young brother in his arms, was surrounded by family members who had come out to greet him.

These included his mom, Annie.

“I told him, as soon as you get home, we’re going straight to bed, to take a rest. But I don’t think that’s happening,” she said, teary-eyed, but laughing.

Walking through the doors of the airport to see so many people waiting to greet “felt good,” Kopalie said. “I was happy.”

He and his fellow crew members were sitting in the Saputi’s lounge or television area on the evening of Feb. 22 when the ship struck ice, with the collision opening a hole in its hull.

“But we didn’t find out for a half hour,” Kopalie said. “The skipper came to tell us. We had to get the pump ready and start to pump out the water right away.”

The Canadian Force’s Joint Rescue Coordination Centre in Halifax sent two Hercules aircraft to the site to deliver additional pumps, dropping them over the ship with expert precision.

In the frantic 24 hours that followed, crew members worked to pump water from the vessel, a 75-metre long factory-freezer trawler. The crew couldn’t keep up with the flooding.

“I was scared, but I had some adrenalin too,” said Kopalie, who’s worked with Qikiqtaaluk Fisheries for almost two years.

A Danish naval patrol ship, the Knud Rasmussen, escorted the ship through rough waters to Nuuk, where the crew arrived tired, but safe, on Feb. 23.

There, the crew members had to wait out a three-day storm before they could fly back to Iqaluit.

“The stressful part was just trying to get a charter from Nuuk,” said Harry Flaherty, president and CEO of Qikiqtaaluk Corp. “We were lucky to be able to get one for today.”

“But no one was hurt, and that is just amazing,” he added.

All Nunavut fishery crew members are based in Iqaluit, except one from Qikiqtarjuaq. QC flew his mother in to greet him in Iqaluit.

Four of the local crew members have worked on the ship since it went into operation 11 years ago, Flaherty said.

The Saputi remains in Nuuk for inspection and repairs to its damaged hull. From there, it’s due to sail to Poland for a couple of months for more thorough work.

That set-back aside, Flaherty said, as far as the corporation is concerned, this incident had a happy ending.

“Too often we hear about accidents with a sad ending and hardship,” he said.

“This is not a sad story, this is a happy story. At the end of the day, everyone survived. It’s like a miracle.”