A Nunavut tragedy—Part Two: The Killer

“Your soul collects everything you do…” 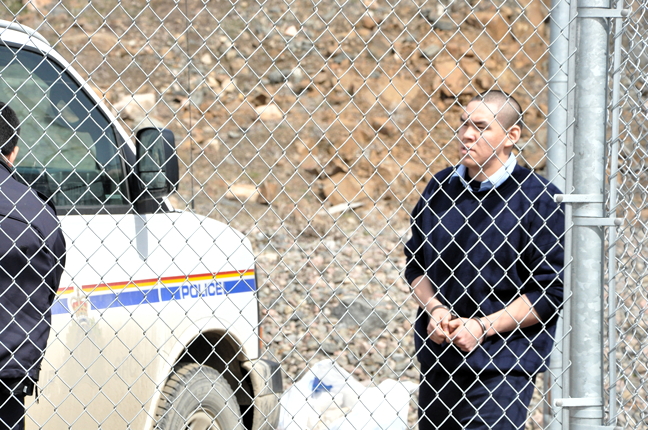 Police escort Peter Kingwatsiak to an RCMP truck during a break on day one of his first-degree murder trial in Iqaluit, June 22, 2015. (PHOTO BY THOMAS ROHNER) 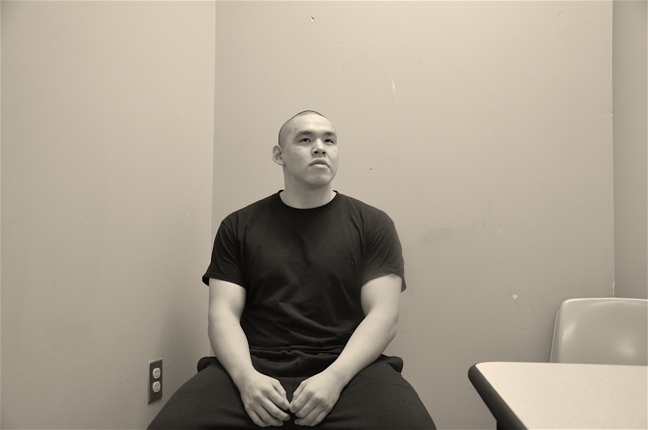 Peter Kingwatsiak was 18, high on gas fumes, suicidal and addled by teenage jealousy when he shot his stepbrother Mappaluk Adla in the head while Adla slept. Kingwatsiak, now 24 and serving a life sentence, has converted to Islam in an effort to find peace in his life and atone for his crime. Here he is at the Baffin Correctional Centre in Iqaluit, Dec. 14, 2015, a week after closing arguments in his murder trial. (PHOTO BY THOMAS ROHNER)

The second in a three-part series on the 2010 murder of Mappaluk Adla, 22, in Cape Dorset, focusing on the killer: the victim’s stepbrother, Peter Kingwatsiak. He was 18 at the time of the murder, and 24 today. All facts in this story were compiled from the court record or in-person interviews with Kingwatsiak conducted in 2015 and 2016.

Alone, Peter Kingwatsiak carried two rifles down the dark, empty streets of Cape Dorset in the early morning of Sept. 20, 2010—one slung over his shoulder, the other in his hands.

He sobbed as he made his way through the hilly streets of the south Baffin community, where most of its roughly 1,300 citizens were asleep. Kingwatsiak stopped crying for a moment as he passed near a neighbour.

He had already hidden a third rifle on a hill behind the house of his stepbrother, Mappaluk Adla. In a few hours, Kingwatsiak would burst into Adla’s living room, kill Adla with a single gunshot to the head before Adla could even react, and then leave.

Kingwatsiak wasn’t thinking clearly that night. He had sniffed gasoline a bunch of times, and in the days leading up to the murder, he had stewed in jealousy and anger.

He wanted to love, protect and defend a pretty girl, but she kept refusing him. Adla had fallen in love with her too: Both Kingwatsiak and Adla had the girl’s name tattooed in pen on their bodies that night.

Kingwatsiak also had been agonizing over the death of his sister, who protected him like a mother until she died by suicide that same month four years earlier. The desperation, loneliness, grief and gas fumes meant Kingwatsiak’s mind was unstable and quickly unravelling.

Part of Kingwatsiak’s instability stemmed from a fact beyond his control: His mind was that of an adolescent. Teenagers often think in catastrophic terms, unable to see tomorrow because of how they feel today, experts said at Kingwatsiak’s trial.

And, like an adolescent, Kingwatsiak went around Cape Dorset before his arrest bragging to other youth about how he was going to kill Adla.

Like most youth, Kingwatsiak craved validation, especially since his parent’s divorce. “I started to lose myself when my parents separated,” Kingwatsiak said in the interview room at the Baffin Correctional Centre in Iqaluit shortly after his 2015 trial.

Over a series of interviews in 2015 and 2016 Kingwatsiak—who’d grown into a stocky, powerfully built man with ears sticking out slightly from his round head—talked about his life and the life of the stepbrother that he ended.

Kingwatsiak had tried to commit suicide a few times since his parents’ divorce, including on the night he killed Adla. After his arrest, police found on Kingwatsiak’s bed pictures of his sister, some bullets and a Bible with a note tucked into it. “There’s no tomorrow… it’s too late now… I love you all,” the note said.

As a youth, Kingwatsiak craved an authority figure, someone to tell him what to do. Like when, the day before the murder, he aimed a loaded gun at Adla. Kingwatsiak had hoped someone would see and stop him and someone did: the pretty girl.

Later that night, his mind seized with thoughts of death—his sister’s, Adla’s, his own—Kingwatsiak silently wished his parents or grandparents would stop him from acting on those thoughts. But they didn’t know what was going through the boy’s mind.

So Kingwatsiak went outside and walked from the moonlit hilltops to the dark valleys below, stopping off at gas tanks to huff fumes, his adolescent thoughts and feelings increasingly hazy, extreme and distraught.

He came across the home of his uncle, Manu Kingwatsiak. He sniffed gasoline again from the tank of a nearby all-terrain vehicle.

Then, through the window of Manu’s house, Kingwatsiak saw his uncle and got scared that Manu would tell Kingwatsiak’s parents about his nephew sniffing gasoline.

So Kingwatsiak went into Manu’s house, found a hunting knife with a foot-long silver blade in the kitchen and attacked his uncle, slashing his uncle’s face, just beside Manu’s right eye.

Kingwatsiak doesn’t remember the attack, because of the gas fumes. But when his uncle’s face gushed with blood, he suddenly came to, as though waking up.

Manu took the knife away, put his arms around Kingwatsiak, and said, “Why’d you do that, nephew? I love you.” Kingwatsiak hugged his uncle back and then left for Adla’s house.

“What I really wanted to do was to talk to someone older than myself… I couldn’t find anybody to talk to,” Kingwatsiak said at trial, about that night.

When police flew him 400 kilometres from Cape Dorset to the Baffin Correctional Centre in Iqaluit for processing after his arrest, it was only the second time Kingwatsiak had ever left his hometown.

The only other time was when he was 14 or 15 and the hose from which he was sniffing gasoline caught fire. Kingwatsiak recovered from burns covering nearly half his body in an Ottawa hospital.

And it was in Ottawa, a couple years after he killed Adla, that he found the highest authority and greatest stability of his life: religion. In an Ottawa jail, in November 2012, Kingwatsiak converted to Islam.

Cape Dorset has a number of Christian churches, some of which Kingwatsiak attended as a child. But he had never met a Muslim Inuk before.

Growing up in Cape Dorset, Kingwatsiak remembered being drawn to images of Muslims praying on television. Many Muslims pray five times a day side-by-side in large groups.

He remembered telling his mother when he was 10 or 11 years old that if he ever saw Muslims praying together, he would approach them and ask about their religion. He found the discipline and camaraderie inspiring.

“Islam, the word, translates to mean submission or surrender… Their words are so strong, it makes sense to me to submit myself to Allah, to be obedient,” Kingwatsiak said.

About a year after his arrest, while awaiting trial in an Ottawa jail, Kingwatsiak saw Muslims praying and approached them. Soon, Kingwatsiak met a Muslim man with Moroccan ancestry who became his mentor in Islam. The mentor sang out prayers from his cell.

“I liked it when he was singing, but I couldn’t understand the words… He told me the most important thing is not just to memorize words, but to mean them, to be sincere and believe them,” Kingwatsiak said.

He began studying Islam and today is teaching himself the Arabic alphabet so he can read the original texts revered by more than 1.6 billion Muslims worldwide.

He read in one Surah, or chapter, of the Koran—Muslims’ holiest book—that even after loved ones die, they live on through their souls.

But while their souls await judgment, their deeds are sealed: they can no longer collect good deeds. Kingwatsiak read about how fasting in the middle of Sha’ban, the eighth month in the Islamic calendar, can be a good deed to benefit the soul of a loved one who has died.

And Kingwatsiak read in a Hadith, which chronicles the acts of Islam’s greatest prophet, Muhammad, a parable about a woman whose grave is charred because she sinned through gossiping. The woman’s brother does as many good deeds for her as possible before her soul is judged by Allah, or God.

Kingwatsiak began applying what he learned from Islam to his own life. “To my sister, to Mappu, others that I have loved in my heart and have died… on their behalf I try to do good deeds. Allah says on their behalf I can ease their torment, through acts of charity, other good deeds. It’s amazing how you can do this.”

And thus Kingwatsiak began the long inward journey to reconcile how he could have killed Adla.

“I started to define for myself what just happened and how that could happen when we’re in the same family. I never had a problem with Mapp,” Kingwatsiak said.

“I learned how emotions can lead you away from yourself… I’m still learning what kind of feeling is guilt, and other emotions like that. They’re really hard.”

But the good deeds Kingwatsiak does for the souls of Adla and his sister are done out of love, not guilt, Kingwatsiak said.

“You have to be aware of the soul because what you do in life echoes in eternity… Your soul collects everything you do… what you do is what you earn, it all adds up.”

You can read the first instalment in this series, A Nunavut tragedy—Part One: The Victim, here.

You can read the third, A Nunavut tragedy—Part Three: The Broken Men, here.