A shocking solution to sewage treatment in Nunavut 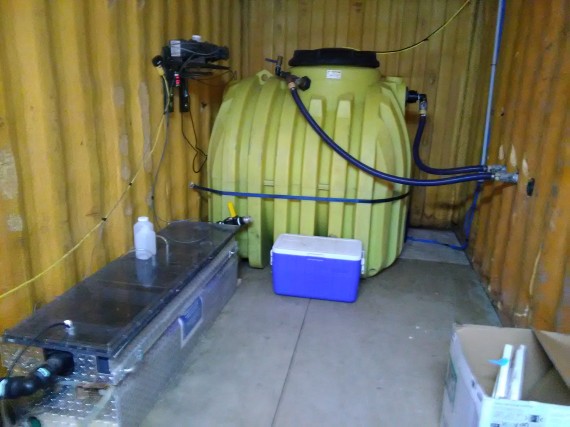 Sewage in many of Nunavut’s smaller communities is treated in lagoons that eventually drain into the ocean. This effluent may not always meet tougher federal discharge standards that came into force in recent years in southern Canada.

Nunavut has so far been exempt from these rules, but may not be forever.

The goal of the device, says Anne Barker, Arctic program leader at the National Research Council, is to create a sewage treatment system suitable for remote, northern locations that could be described as “simple to use, doesn’t require a lot of moving parts, easy to maintain and hopefully low cost.”

The BEAST is a kind of anaerobic treatment system. That means it breaks down sewage without oxygen being present.

What makes the BEAST different from other systems is that it also zaps the sewage with a low-voltage current of electricity.

“In a nutshell, there’s microbes in the system, in the waste water. My understanding is that by applying the electrodes in this low voltage, you’re effectively enhancing the bio-degradation that’s happening,” said Barker.

“It’s giving it a little kick in the pants, to ramp it up.”

One BEAST will be tested out this year at Cambridge Bay’s Canadian High Arctic Research Station, to give researchers a better sense of how it performs in Arctic conditions.

A model big enough to handle the sewage produced by 200 people could fit inside a shipping container, said Barker. “So it’s a fairly small footprint, compared to a sewage lagoon.”

And researchers believe the technology should be easily scaled, “from a house to a several-thousand-person community,” she said.

One use for the BEAST would be to deploy a unit to a Nunavut community with an overloaded sewage lagoon, to help reduce its sludge output, said Barker.

But the NRC sees many other potential uses for the technology, which it recently patented and hopes to commercialize, including “developing countries, on board vessels, cottages,” said Barker. “There are a lot of different applications.”

The device could be useful on Arctic cruise ships, given the stricter rules they face for dumping effluent under the Polar Code.

The BEAST may also be useful for northern mines, and for the military during Arctic exercises.

Operated at a big enough scale, a BEAST system could also generate biomethane, which could conceivably be used to offset the use of diesel fuel, said Barker.

Tests of the system, with models ranging in capacity from 20 litres to 20,000 litres, have produced promising results.

“All the tests we’re seeing, biological oxygen demand is one way of measuring how well a system is working. We’re finding removal rates, generally, in the mid to high 90 percentiles. If you had just a straight septic tank, you might have two per cent removal,” said Barker.

“So this is at the extreme end, and it’s quite a bit higher than what the new Environment Canada guidelines are suggesting. That’s why we’re quite optimistic about success.”

Barker acknowledges that new technology tested in the North doesn’t always live up to its promises. That includes a sewage treatment plant built two decades ago in Iqaluit that never worked properly.

“That’s where we can come in and do some of the de-risking of these technologies, and go, does it work at the lab scale? Check. Let’s move on. Let’s scale it up,” said Barker.