Abandoned Nunavut diamond mine now belongs to the Crown 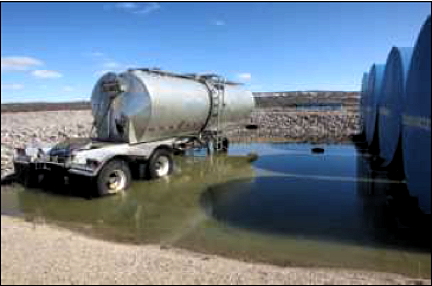 Nunavut’s first and only functioning diamond mine, which changed hands a few times before being deemed “closed or abandoned” about a year ago, has officially changed hands again.

The Jericho mine, about 240 kilometres southeast of the western Nunavut community of Kugluktuk, is now owned by the Government of Canada.

Representatives from Aboriginal Affairs and Northern Development Canada filed legal documents this past fall at the Nunavut Court of Justice to take possession of the mine’s assets after its former owners, Shear Diamonds (Nunavut) Corp. defaulted on a debenture agreement.

According to documents obtained from the court, Nunavut Justice Robert Kilpatrick granted that court order Oct. 14.

That means the Crown now owns everything from a diamond processing plant to drill and blasting equipment, industrial vehicles including a fire truck, bulldozer and excavator, some camp buildings, a laboratory and all its accessories and of course, the mineral rights to the property.

All those assets are laid out in Schedule A of the court order and may, one day, be part of a huge government garage sale.

In an email to Nunatsiaq News, AANDC could not provide an estimate on how much the mine’s assets are worth but the public affairs team did say the department is “currently examining all of its options,” regarding what to do with its latest diamond-studded acquisitions on the tundra.

Nunavut Impact Review Board staff have been monitoring the site for more than a year since Shear effectively washed its hands of the mine after extracting diamonds for about four months in 2012.

Before that, Jericho was owned by Tahera Diamond Corp. which operated the mine, located in the western Arctic’s diamond belt, from 2006 to 2008 and then went into creditor protection in January 2008.

Under the terms of the mine’s water licence, AANDC had the right to do whatever was necessary to protect the environment, and it had been doing so with money it held in security from Shear.

The Crown held a debenture granted by Shear on Aug. 27, 2010, AANDC said in the email. Under the terms of that debenture — or special loan — Shear granted Canada a security interest in Shear’s assets.

“In the event that amounts owing were not paid when due,” Canada could act on that security interest which it did, this fall, “by obtaining a court order which terminated Shear’s interest in the secured assets and transferred ownership of those assets to Canada,” AANDC’s email said.

According to the legal chronology, proceedings to take over the mine began on Aug. 26. Shortly thereafter, court officials attempted to serve documents on Shear Diamonds and also Taché Company, part of the diamond giant DeBeers Group of Companies.

Manuel Rappaport, who had been identified as a director at Shear through NIRB correspondence, has a Taché email address.

On Nov. 14, he emailed the NIRB to say that he ceased being a director at Shear “some time ago.”

No one from Shear — if the company even exists anymore — was appeared in judge’s chambers on Oct. 14 when Justice Kilpatrick made Shear’s forfeiture of assets official and binding.

The Crown didn’t get absolutely everything at the Jericho mine site.

Assets and leases on land owned by the Kitikmeot Inuit Association were excluded from the court order.

In a September letter to the NIRB, Paul Emingak, the Kitikmeot Inuit Association’s executive director, says “KIA and other creditors rank behind the Crown with respect to security interests in the assets at the site. KIA intends to collaborate with AANDC in order to ensure that the portion of the project site on Inuit Owned Lands is properly abandoned.”