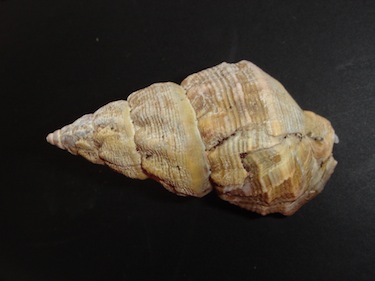 The polar sea snail was among the sea creatures studied by the British Antarctic Survey during its research on ocean acidification. (HANDOUT PHOTO)

Increased acidity is affecting the size and weight of shells and skeletons of urchins, sea snails and other sea creatures.

And the trend is widespread across marine species, says an international study on the likely impact of ocean acidification on shellfish and other marine organisms in the world’s oceans.

Ocean acidification occurs because some of carbon dioxide spewed into the atmosphere from the burning of fossil fuels dissolves in the ocean and reacts with water to produce an acid, called carbonic acid, which causes the oceans to become more acidic.

And this could impact on the food supply for marine predators such as seabirds and seals as well as for people, said a British Antarctic Survey news release on the study, published this week in the journal Global Change Biology.

For the study, an international team of scientists investigated the natural variation in shell thickness and skeletal size in four types of marine creatures living in 12 different environments from the tropics to the polar regions.

They wanted get a clearer understanding of similarities and differences between species, and to make better predictions of how these creatures might respond to increasing acidity in the oceans.

That’s because effort required by clams, sea snails and other shellfish to extract calcium carbonate from seawater to build shells and skeletons varies from place to place in the world’s oceans.

This study shows that sea life has adapted to living in environments where calcium carbonate is relatively difficult to obtain by forming lighter skeletons.

But carbon dioxide from fossil fuel burning is now altering seawater, making it even harder for marine animals to make shells and skeletons.

Scientists found that as the availability of calcium carbonate decreases, the skeletons of clams, sea snails, lampshells and sea urchins get lighter and account for a smaller part of their weight.

The fact that same effect occurs consistently in all four types suggests the effect is widespread across marine species, and that increasing ocean acidification will progressively reduce the availability of calcium carbonate, the news release said.

“This effect is strongest at low temperatures and the results showed polar species to have the smallest and lightest skeleton, suggesting that they may be more at risk in the coming decades as the oceans change,” Lloyd Peck of British Antarctic Survey said.

Ten years of study in the Beaufort Sea have already showed the seawater is becoming more acidic and fresher. Research carried out in the Svalbard Islands off Norway’s northern coast also suggests Arctic seawater is likely to reach corrosive levels within 10 years.