“Policymakers will hopefully find their way to a global agreement” 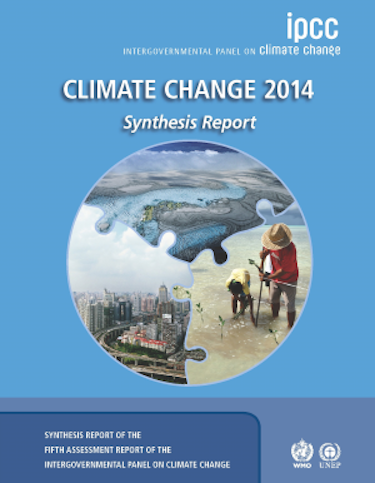 You can read the synthesis report online at http://www.ipcc.ch/report/ar5/index.shtml. 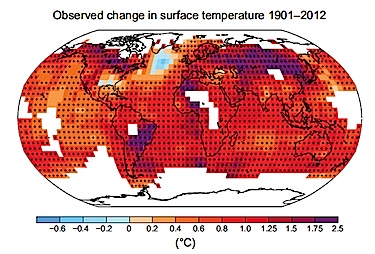 This map from the IPCC synthesis report shows how much temperatures have risen from 1901 to 2012. 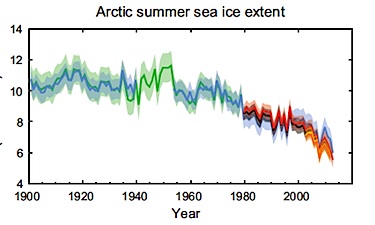 This graph from the PICC report shows how summer sea ice has decreased from 1901 to 2012. There’s no doubt that human activity is changing the Earth’s climate system: that’s one of the major conclusions of a Nov. 2 report from the United Nations Intergovernmental Panel on Climate Change, set up to investigate climate change 25 years ago.

It the world doesn’t act to reduce climate-warming greenhouse gas emissions, the costs will be “enormous,” leaving no part of the world untouched, the IPCC says.

Inaction puts everyone at risk, said Rajendra K. Pachauri, chair of the IPCC, at the report’s release in Copenhagen.

And that’s despite the reality that who are the most vulnerable to climate change “have contributed and contribute little to greenhouse gas emissions.”

“The solutions are many and allow for continued economic and human development,” he said. “All we need is the will to change, which we trust will be motivated by knowledge and an understanding of the science of climate change.”

The new IPCC report, which reflects a five-year effort by 830 authors and more than 30,000 research studies, says “the atmosphere and ocean have warmed, the amounts of snow and ice have diminished, and sea level has risen.”

The concentration in the atmosphere of the greenhouse gas carbon dioxide has also increased to a level “unprecedented in at least the last 800,000 years.”

This will have an affect on the Arctic: the report’s authors conclude that it is is” very likely that the Arctic sea ice cover will continue to shrink and thin.”

Spring snow cover in the northern latitudes is also “very likely” to decrease during the 21st century as world’s surface temperature rises.

And the report says it is “virtually certain that near-surface permafrost” in the Arctic will be reduced as global mean surface temperature increases.

To curb climate change, the report suggests renewable energy will have to grow to 80 per cent of the power sector by 2050.

The use of fossil fuels, including petroleum products, should be phased out “almost entirely by 2100” and be replaced by such renewable sources of energy as solar and wind power, or nuclear energy,

Among the report’s findings:

• over the last two decades, the Greenland and Antarctic ice sheets have been losing mass, while glaciers have continued to shrink almost worldwide; and,

The report predicts that oceans will continue to warm during the 21st century, and heat will penetrate from the surface to the deep ocean and affect ocean circulation. Global glacier cover will also continue to decrease.

The IPCC report, approved by more than 120 governments, should become “the roadmap by which policymakers will hopefully find their way to a global agreement to finally reverse course on climate change,” Pauchuri said.

The UN hopes to deliver a new global treaty on climate change at an international meeting in Paris in December 2015.

You can read a summary of the report released Nov. 2 here.

That IPCC report reflects the findings of the three IPCC working groups, which were released over the past 13 months and looked at the causes, impacts and solutions to climate changes.

• a report on the physical science of climate change, with predictions of rising temperatures, melting ice and rising ocean levels;

• a report on the impacts, adaptation, and vulnerability which said the Arctic would see reduction in cold weather, infrastructure damage and a changing physical environment;

• a report on the mitigation of climate change, that called for “a wide array of technological measures and changes in behaviour” to limit temperature increases world-wide; and,

• two special reports released in 2011, one on managing the risks of extreme events and disasters related to climate change, such as heat waves, glacial retreat and/or permafrost degradation which could affect “high mountain phenomena such as slope instabilities, movements of mass, and glacial lake outburst floods.”