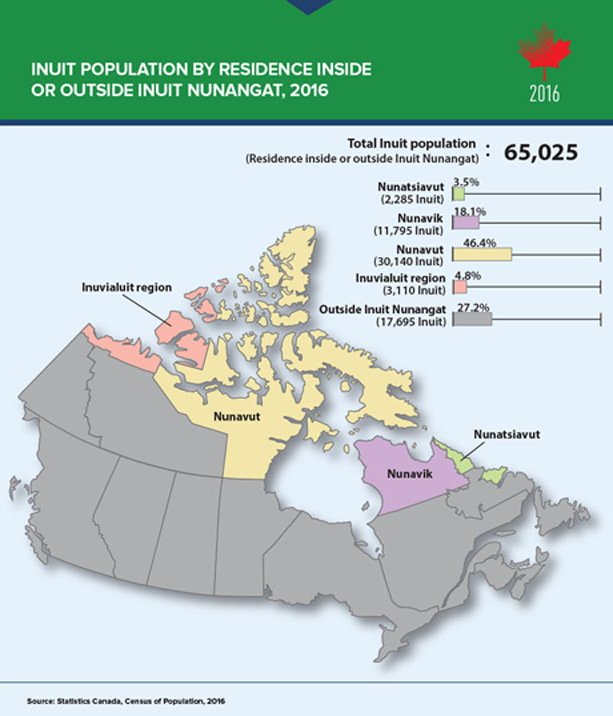 This graph, produced by Statistics Canada, shows that 27.2 per cent of the Inuit population in Canada, or 17,695 people, lived outside Inuit Nunangat in 2016.

Nearly one in three Inuit inside Canada’s borders, 27.2 per cent of the total Inuit population, lived outside Inuit Nunangat in 2016, Statistics Canada reported Oct. 25.

That means 17,695 Inuit, representing a growth rate of 61.9 per cent over the 10-year period between 2006 and 2016, lived outside the Inuit homeland last year, when StatsCan did its last census.

In 2006, Statistics Canada counted only 10,925 Inuit who lived outside Inuit Nunangat, defined as Nunavut, Nunavik, Nunatsiavut and the Inuvialuit region of the Northwest Territories.

These most recent numbers reflect a trend that likely began prior to 2001, when the national statistics agency estimated that only about 5,000 Inuit, or about one in 10, lived outside those four Arctic regions.

Inside the four regions of Inuit Nunangat, the Inuit population also grew rapidly between 2006 and 2016, but by a lesser rate of increase: 21.9 per cent.

Overall, Statistics Canada estimates the total Inuit population inside Canada for 2016 at 65,025.

Of those Inuit who lived outside Inuit Nunangat, the highest proportion, 30.6 per cent, lived in the Atlantic provinces, especially Newfoundland and Labrador, home to about a quarter of all Inuit who live outside the Arctic, StatsCan said.

And despite the rapid rate of population growth in the Arctic, many Inuit now live in cities.

“Outside of Inuit Nunangat, 56.2 per cent of Inuit lived in a metropolitan area of at least 30,000 people,” StatsCan said in its release.

This appears to reflect a trend occurring across all Indigenous populations in Canada.

This is attributable to many causes, the agency said.

“Like the overall population growth of First Nations people, Métis and Inuit, the urbanization of Aboriginal peoples in Canada is due to multiple factors—including demographic growth, mobility and changing patterns of self-reported identity,” the release said.

In another release, StatsCan reported that 42,065 Inuit reported the ability to speak an Inuit language in 2016. Of those, 64.1 per cent were in Nunavut and 29.4 per cent in Quebec.

You can find the Aboriginal language report here.

Aboriginal peoples in Canada: Key results from the 2016 Census by NunatsiaqNews on Scribd