“I don’t know what to tell them” 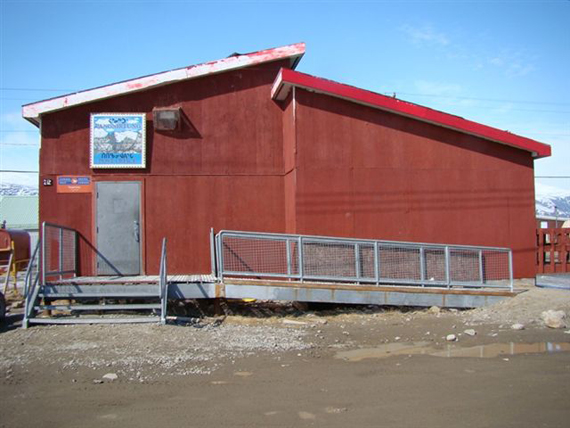 Burglars broke into Pangnirtung’s post office storeroom over the weekend, damaging several parcels and making off with others. The break and enter comes during the post office’s busiest time of year, when dozens of Christmas gifts arrive by mail every day. (PHOTO COURTESY OF THE HAMLET OF PANGNIRTUNG)

Lucy Akulukjuk isn’t sure what she’ll tell her three children.

Her three- and six-year-old daughters and eight-year-old son and have been waiting for their Christmas presents from their grandparents and aunts to arrive in Pangnirtung.

But now Akulukjuk’s children might have to go without, since burglars broke into the community’s Canada Post office over the weekend.

It’s still not clear what has gone missing, while police continue to investigate the incident.

But the intruders opened most of the parcels in the storeroom, damaging some and making off with others.

“I was crying when I heard about it, I’m so mad,” Akulukjuk said. “Their grandparents told the kids the gifts were coming. Now I don’t know what to tell them.”

There’s still a chance some of Akulukjuk’s parcels will be returned to her — police in Pangnirtung have held on to the remaining packages for now to check for fingerprints and other evidence.

But during the post office’s busiest time of year, Akulukjuk knows that many people in her community will be affected by the break and enter.

Pangnirtung’s postmistress Mandy Qaqasiq only discovered the break-in the morning of Dec. 19, when she came into work.

Police say it could have happened anytime between Dec. 17 and early Dec. 19.

The part of the post office that was broken into is a storeroom separate from the actual postal office, where First Air leaves mail and parcels that arrive in the community.

Today, Qaqasiq has been fielding questions from customers, anxious to know if their parcels made it in.

“They’ve been asking when their getting their packages,” Qaqasiq said. “And if not, (they want to know) if the hamlet will pay them back (for what was stolen).”

But Qaqasiq said it’s the first break and enter at the post office since she’s worked there, and she’s putting up new locks today to make sure it’s the last.

Meanwhile, local police are asking for help from the members of the public to locate the missing items, “and possibly save Christmas for several families.”

The community of Pangnirtung and police encourage anyone with information about the break-in to contact the Pangnirtung RCMP Detachment at (867) 473-0123 with their information or call Crime Stoppers at 1(800) 222-8477(TIPS).

Callers can remain anonymous and they may be eligible for a cash reward of up to $2,000, if their tip leads to an arrest.