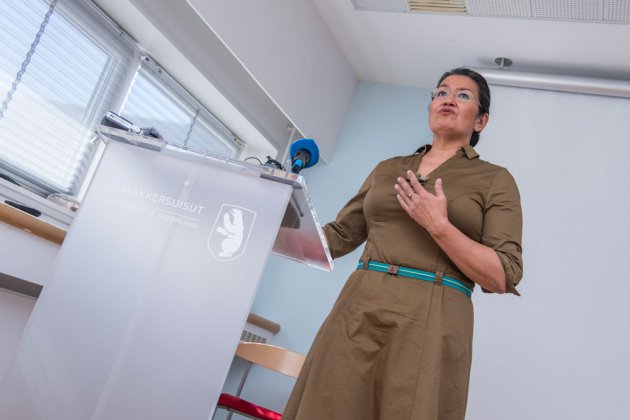 A “domestic issue,” is how Leona Aglukkaq, Canada’s minister responsible for the Arctic Council, described the decision by Greenland’s premier to boycott the May 15 Arctic Council ministerial in Kiruna, Sweden.

Aleqa Hammond, the premier of Greenland, decided to boycott the May 15 Arctic Council gathering in Kiruna, Sweden, because she said Greenland should have a voting seat at the council, instead of sitting, in a non-voting capacity, behind the Danish foreign minister.

At a news conference in Kiruna, Aglukkaq referred comment on the reasons prompting Hammond’s decision to Denmark’s foreign minister, “because that is a domestic issue within the country of Denmark.”

“It’s unfortunate the new premier is not here,” Aglukkaq said, calling Hammond’s decision to stay away “a missed opportunity for her to meet the Arctic Council members and the important work that we do.”

Aglukkaq said she planned to contact Hammond later, because “it’s important to make sure that the work that we do” gets input from Inuit.

As for Greenland’s right to a seat at the high-level meetings, Aglukkaq said that the Arctic Council is formed of eight member states, with voting powers — “It’s very clear who’s on the Arctic Council through the declaration we signed in 1996 and that remains today.”

“Greenland is part of Denmark,” she said.

Aglukkaq said that Greenland contributes in valuable ways to the Arctic Council — “and I would encourage the premier and the foreign affairs minister of Greenland to resolve this domestic issue.”

with files from Alex Boyd in Kiruna, Sweden