Company will spend more than $30 million in Nunavut 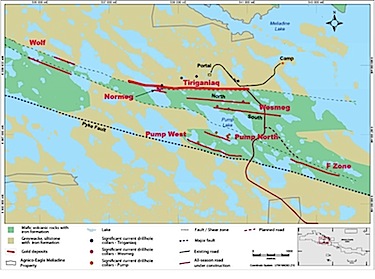 This map shows the lay-out of Agnico-Eagle’s Meliadine gold mine project near Rankin Inlet. (IMAGE COURTESY OF AGNICO-EAGLE)

Agnico-Eagle Mines Ltd., which will spend more than $20 million in 2012 on exploration at its Meliadine gold mine project, has decided to add on two more months of drilling in and around the project near Rankin Inlet.

That’s due to encouraging results to date from the 2012 exploration program.

The Tiriganiaq bulk sample returned 13.5 grams per tonne gold from 4,573 tonnes, confirming the grade estimate of reserves in the two largest zones, and “increasing confidence in the model precision and accuracy of future reserves and resources class gold deposits that we expect will continue to grow,” Sean Boyd, Agnico-Eagle’s president and chief executive officer, said in a June 26 news release.

“We look forward to the completion of several feasibility and expansion studies in the medium term that will reinforce that Agnico-Eagle remains a lower-risk gold growth company,” Boyd said.

The Meliadine drilling program will now continue into September 2012. This drilling will target the parts of the deposit that have the best potential, the company said.