“We can dare to dream big again” 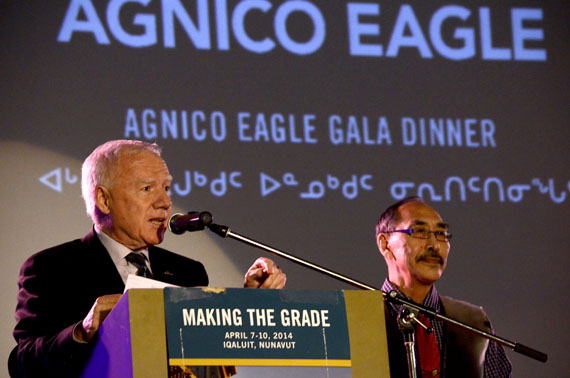 James Nasso, the chair of Agnico Eagle’s board of directors, announcing April 10 that Agnico Eagle will donate $5 million towards a university in Nunavut that would be created at a future date. (PHOTO BY DAVID MURPHY)

There’s no target date, no name and no budget, but the Government of Nunavut has begun work on creating a university in Nunavut.

The surprise announcement came from James Nasso, chair of Agnico Eagle’s board of directors, April 10 at the Nunavut Mining Symposium’s closing gala before hundreds of conference delegates gathered inside the Iqaluit curling rink.

“The government is taking the initiative and under the leadership of education minister Quassa will spearhead, with the premier, the University of Nunavut,” Nasso said.

The crowd gave him a lengthy standing ovation after he made the announcement.

It’s not clear where the rest of the funding for the university will come from.

But education minister Paul Quassa said the government can’t build the university by itself.

“As our new mandate, Sivumut Abluqta, states, our government alone cannot achieve the vision of Nunavut. We need partners in industry, education, government and our Inuit organizations,” he said.

Quassa said plans are in a “preliminary state.” There’s no indication of when or where the university will be built.

“As we said, this is a very good start. And I don’t think it’s a matter of talking about the timeframe at this time,” Quassa said.

“But it’s there now and it’s a matter of stepping forward with it.”

The idea of a university has been in the works for a while, Quassa said.

“A university of the North has been discussed for many years, as it would offer a broader spectrum of opportunities to all Nunavummiut,” Quassa said.

Neither of those institutions offer full degree programs within Nunavut, however.

The Akitsiraq Law School offered a degree program in law several years ago, and talks are under way to offer a possible second round in a couple of years.

But there is no brick-and-mortar university in any of the three Canadian territories.

There have been talks of creating a pan-Arctic university in the past, but nothing has come to fruition.

And there is a University of the Arctic that connects post secondary institutes such as Nunavut Arctic College to other circumpolar colleges and universities around the world, but UArctic is not a degree-granting institution.

There has also been push for a physical Arctic university from the Walter and Duncan Gordon Foundation, and a researcher from Laval University.

Nasso is optimistic this project will become a reality, however.

“We were bent on doing it. This is a good beginning, and I think a lot of people are going to come forward and this will come to fruition sooner than you think,” Nasso said.

“This is all new to some of the folks here. But there’ll be much support coming from many quarters. I don’t know where from. But people will be involved,” he said.

Nasso said resurrecting the idea of a university came after he read comments in a Globe and Mail article from chair of the National Committee on Inuit education Mary Simon, who said Canada is the only circumpolar nation without a northern university.

Overall, Quassa said this is a big step for the territory.

“We face difficulty and challenges in our education system. And our department of education is focused on building the foundation from kindergarten to Grade 12 and beyond to give our students the skills and academic background to enter post secondary,” Quassa told the crowd.

“I hope this gesture inspires future sponsorships between governments, industry, Inuit organizations and other stakeholders — we can dare to dream big again.”