Agnico Eagle gets project certificate for Whale Tail mine

Open-pit gold operation would employ 500 during construction, 930 during operation 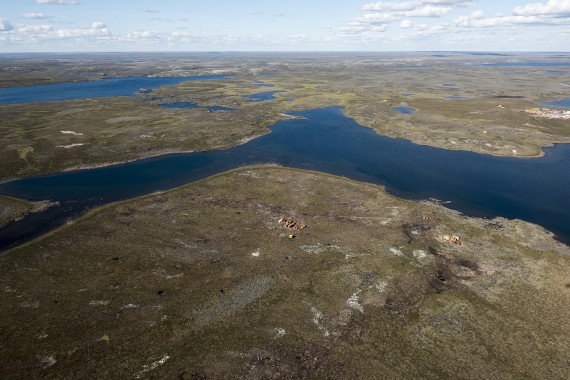 This is an aerial view of Agnico Eagle’s Whale Tail project, found 150 about kilometres north of Baker Lake. The company now has its project certificate for plans to build an open-pit gold mine at the site. (PHOTO COURTESY AGNICO EAGLE/FLICKR)

As expected, Agnico Eagle has received a project certificate to go ahead with developing its new Whale Tail mine.

This follows a decision last month by Carolyn Bennett, the minister of Crown-Indigenous Relations and Northern Affairs, to give the project the green light.

Now that the company has its project certificate, its remaining permits and licences should quickly fall into place.

The certificate, announced on March 15, comes with 64 terms and conditions to ensure the mine is built, operated and cleaned up in a way that doesn’t “unduly and adversely” harm the environment, according to a news release issued by the Nunavut Impact and Review Board.

Many of those terms and conditions are aimed at reducing damage to the region’s migrating caribou population.

In November, the review board recommended that the project proceed.

Whale Tail would be an open-pit gold mine at the Agnico Eagle’s Amaruq property, about 150 kilometres north of Baker Lake, and about 50 km northwest of the company’s existing Meadowbank gold mine.

Ore would be trucked from Whale Tail along a 65-km private haul road, at a rate of 9,000 to 12,000 tonnes per day, to the Meadowbank mine site for milling. Some 8.2 million tonnes of tailings waste would be stored at Meadowbank’s existing tailings facility.

Agnico Eagle hopes to begin construction soon. The company expects it will need up to 500 workers to build the mine.

Once the mine is in operation, which is envisioned by the end of the year, employment would rise to 930 workers, divided into rotating shifts.

The Meadowbank mine’s operations are expected to wrap up around the same time that Whale Tail’s production begins.

Agnico Eagle is also building its Meliadine gold mine near Rankin Inlet, which is set to open in 2019.

Whale Tail is on Inuit-owned land, and the company signed an Inuit impact and benefits agreement with the Kivalliq Inuit Association in June 2017.

Through that deal, the company will pay the KIA a net smelter royalty of 1.4 per cent net and has already given the KIA a $6.5-million payment.