Agnico Eagle gets water licence for new Nunavut gold mine

Gold production at Whale Tail, near Baker Lake, set to start in fall of 2019 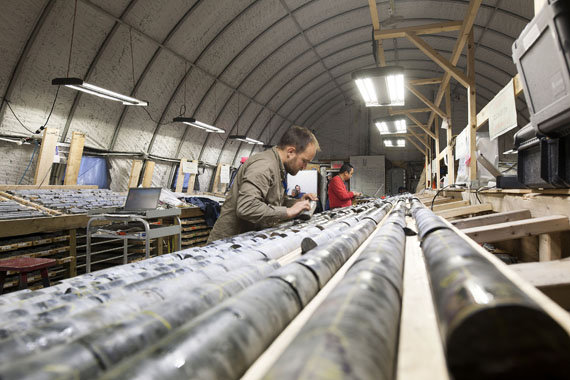 Production is on schedule for the fall of 2019 at Agnico Eagle’s Whale Tail deposit, thanks to an approved water licence. Here workers inspect core samples from the company’s Amaruq project. (FILE PHOTO)

Agnico Eagle Mines can start construction at its Whale Tail gold deposit, following the federal government’s approval of its water licence on July 11.

The green light comes following approval by the Nunavut Water Board.

Whale Tail is an open-pit gold deposit that’s part of the company’s Amaruq project. That’s a satellite deposit found 50 kilometres northwest of Agnico Eagle’s Meadowbank mine, near the Kivalliq community of Baker Lake.

With a water licence now in hand, the company says it remains on schedule to begin production at Whale Tail next fall in 2019.

“We would like to thank the various regulatory agencies, both federal and territorial, the Inuit organizations, the local communities and our employees for their diligent participation in the permitting process,” Sean Boyd, Agnico Eagle’s CEO, said in a news release.

In June at Whale Tail, workers finished building an underground ramp that extends almost 500 metres and cost around $10.7 million. Agnico Eagle plans to build about 1.2 kilometres of underground ramping for exploration in 2018. Those ramps will cost around $21 million.

“The main purpose of building the ramp is to carry out additional exploration drilling and evaluate the potential for underground mining activities,” the news release states.

Agnico Eagle’s Amaruq project spans over a property of about 100,000 hectares. The site, approved in February 2017, will supply ore to the company’s Meadowbank mill.

Drilling and exploration at Amaruq are ongoing. Recent finds “could potentially extend the mine life,” Boyd said.

This spring the company also expanded a camp, finished a maintenance shop for equipment, and expanded a road at the Amaruq site.

Agnico Eagle estimates capital expenditures at Amaruq for 2018 will be around $175 million.

At the company’s Meliadine Gold Project near Rankin Inlet, production should start next summer if Agnico stays on schedule, the news release said.

“The first boat of the 2018 shipping season has been off-loaded at Rankin Inlet, and additional boats are expected in the coming weeks.”