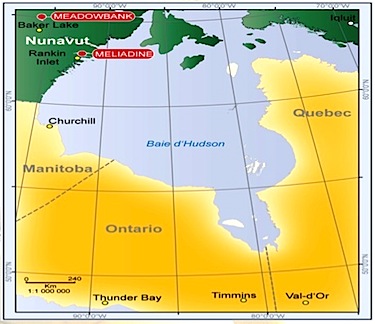 This map shows the location of the proposed Meliadine gold mine project in Nunavut. (FILE IMAGE)

The future of the Meliadine gold mine project in Nunavut’s Kivalliq region near Rankin Inlet is now more uncertain, after Agnico Eagle Mines Ltd. announced last week that in each of 2013 and 2014, it plans to reduce spending on the project.

While the company plans to continue exploration work at the site, located 24 kilometres from Rankin Inlet, the reductions mean less money will be spent in 2013 and again in 2014, when only about half the projected amount earlier earmarked for developing the mine will be spent.

Faced with steadily falling prices for gold, down $300 an ounce to about $1,300 from last July’s $1,600 per ounce, Agnico Eagle will reduce spending on Meliadine in 2013 to $80 million from a previously budgeted $90 million.

And the company will continue to do exploration and the building of a ramp for underground exploration.

But after 2014, any more work on the project “will be subject to board approval and prevailing market conditions.”

The move comes after Agnico Eagle reported a quarterly net loss of $24.4 million on July 24 — due mainly to problems at its Kittila mine in Finland and a lower cost per ounce for gold.

A news release said the company is now reviewing all future plans “with the goal of reducing capital and operating costs on an ongoing basis.”

For Meliadine, this means the 2013 work program “has been prioritized” and reduced by about $10 million.

But permitting and licencing activities will continue, the company said.

The proposed Meliadine mine, to be connected to Rankin Inlet by an all-weather road, would operate for at least 13 years, based on an earlier estimate of the mine project’s gold deposits.

And if it goes ahead, it would be a gold mine of its own for jobs in the Kivalliq region: 1,000 workers to be hired during the mine’s three-year construction period and about 700 workers during production, with about 350 workers on site at any given time.

Before the July 24 announcement, Agnico Eagle had planned to nail down its project certificate by mid-2014, and, if the company decided to move ahead with the project, to start production in 2017.

That date has now been pushed back.

Sean Boyd, Agnico-Eagle’s chief executive officer, said July 28 that the company plans “to continue with our ramp at Meliadine, which allows us to keep that project on the projected timeline for late 2018, assuming we get board approval a year from now.”

Meliadine is the second promising Nunavut mine project to suffer a setback in 2013. Last January, the Baffinland Iron Mines Corp. told Nunavut regulators the company planned to reduce the scope of the Mary River iron project in response to slumping steel prices and rising borrowing costs.

Meanwhile, Agnico Eagle’s Meadowbank gold mine near Baker Lake — the only operating mine in Nunavut — will continue to produce gold until 2018, Agnico Eagle said July 24.

There, mine site costs per tonne were seven per cent lower than during the same period in 2012.