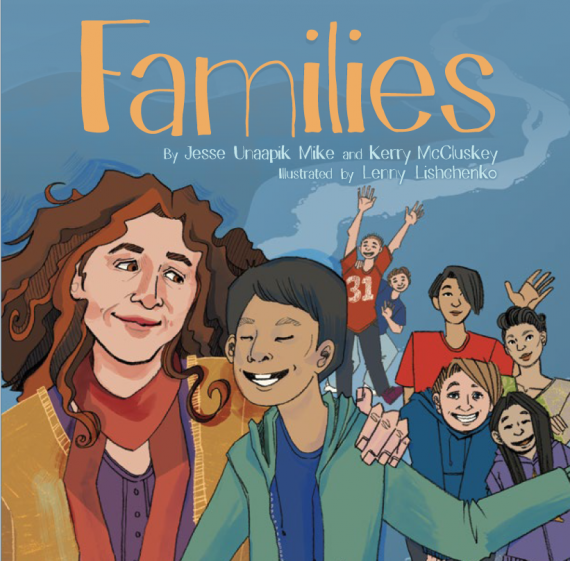 Cover art for a new Inhabit Media book that celebrates family diversity in Nunavut. You can get the book in Iqaluit, Feb. 25, at Inhabit Media’s upcoming author event. (PHOTO COURTESY OF INHABIT MEDIA) In Nunavut, the “nuclear family”— meaning mom, dad and 1.5 kids—isn’t the only norm.

That’s why Kerry McCluskey and Jesse Unaapik Mike dreamed up their new Inhabit Media book, titled Families, so that children from different family makeups would know that every kind of family is the right kind.

The book, which will be on display at an upcoming Inhabit Media book-signing event in Iqaluit, celebrates family diversity by featuring a young character from a single-parent home, as well as child characters who have same-sex parents and step-parents, and children who are cared for through adoption and raised by grandparents or other relatives.

“It’s really reflective of life in Nunavut and all the different families that you see,” said McCluskey.

The main character in the book, Talittuq, is based on her son, River.

“I had this idea that we were the anomaly, being a single-mother family, and in fact that wasn’t the case. I started to really look around and realize that this would make a very good book. People needed to understand that the diversity of families was very much part of life in Nunavut.”

Books that show diverse families aren’t very common and even the ones that do exist aren’t necessarily accessible to children in Nunavut, said co-author Jesse Unaapik Mike.

She said that’s what makes Inhabit Media books so important.

“Whether they are traditional stories or not, the kids can identify with the characters that might look like them, that might have names similar to people in their communities or have similar relationships,” she said. “It’s great to have all of that available so that kids know their way of life and where they come from is just as important as any other child’s home.”

So far, readers are saying that the book, which is based in Iqaluit and uses Inuit phrases and names, is much needed in Nunavut, Mike said.

“It can be so simple, what would make [a book] relevant to a child.”

You can pick up a copy of Families at the Koojesse Room in the Frobisher Inn between 1 p.m. and 3 p.m. on Feb. 25.

The following Inhabit Media authors will be among those on hand at that event to sign books:

• Germain Arnaktauyok, author of Those that Cause Fear, and Inuit Spirit

• Roselynn Akulukjuk, author of The Owl and the Lemming, based on her film of the same name

• Aviaq Johnston, author of Those Who Run in the Sky

McCluskey also has a new book out that she co-authored with Roy Goose, called Sukaq and the Raven. The book is based on a creation story and shows a child who daydreams about flying on the back of a raven, while the world is being made.

Other new Inhabit Media titles include the following:

• The Muskox and the Caribou by Nadia Mike

• Why the Monster by Rachel and Sean Qitsualik-Tinsley

• Mamaqtuq! by the Jerry Cans

• The Gnawer of Rocks by Louise Flaherty

• Elisapee and Her Baby Seagull by Nancy Mike