An Arctic economic boom? Not so fast, analysts say 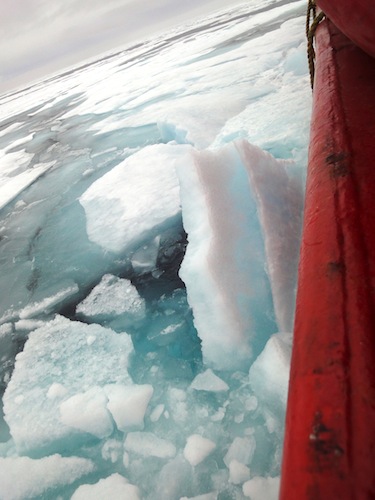 Navigating through ice-choked waters, similar to those seen here in the Northwest Passage, mean “Arctic maritime activities will remain highly seasonal,” say the two authors of a paper published by the Finnish Institute of International Affairs. (PHOTO BY JANE GEORGE)

Two Finnish analysts warn that due to its enormous risks, the world’s Arctic regions won’t likely experience a big boom in shipping or gas and oil development any time soon.

In the paper, published by the Finnish Institute of International Affairs, analysts Harri Mikkola and Juha Käpylä say the popular image of the Arctic as a trove of wealth is sexed-up and over-hyped.

“The media, in particular, have been eager to report on the Arctic developments in a fairly colourful way, dubiously emphasizing the lucrative yet conflictual and even anarchic character of the area,” their paper said.

The reality, however, is that the Arctic “remains one of the most peaceful areas on the globe,” because of good bilateral relations between Arctic countries, good multilateral relations within the Arctic Council, and acceptance of the United Nations Law of the Sea Convention.

They also point out that the potential economic opportunities in the Arctic rest on the assumption that ever-increasing climate change is “the fate of mankind.”

But, at the same time, exploiting those opportunities will contribute to the growth of climate change.

“If this is the case, the tragedy of the Arctic seems to be that its economic potential will materialize only in the context of a deteriorating globe, or in fact assuming it,” their paper said.

At the same time, they acknowledge that global warming and the rapid melting of multi-year sea ice has sparked deep interest in new Arctic sea routes and the exploitation of Arctic oil and gas deposits.

But they warn that a long list of uncertainties posed by climate and geography make the use of new Arctic shipping routes an expensive and risky proposition.

Even the Northern Sea Route north of Russia, which has seen some commercial traffic since 2005, might see only limited use as a maritme shipping route, they said.

And the Northwest Passage is even more risky, since it’s often clogged with ice even in the summer.

“This means that year-round transport in the prevailing conditions is not economically feasible and Arctic maritime activities will remain highly seasonal,” they said.

Mikkola and Käpylä cite many long-term challenges to Arctic shipping:

• multi-year is disappearing, but Arctic waters will continue to freeze in the winter and it’s “extremely difficult” to when passages will open in the summer;

• Arctic waters are mostly shallow, which puts limits on the size of commercial vessels, reducing their cargo-carrying capability, leading to higher costs for shippers;

• the cold Arctic climate puts big stresses on machinery and limits the kinds of products that can be carried on vessels;

• ice-strengthened vessels are more expensive to build and “less beneficial to operate in other waters besides the Arctic Ocean;”

• Polar Class icebreakers can take up to 10 years to build and can cost up to $1 billion;

• because of their unpredictability, Arctic routes are likely not attractive to customers who use “just-in-time” supply chain systems;

• Arctic regions lack harbours, communications infrastructure and “even experienced staff to operate in icy waters;” and,

• because of all the above risks, insurance premiums for Arctic shippers will likely remain high.

“What this means is that while the Arctic routes are shorter in distance and more and more frequently used, their feasibility and lucrativeness remains uncertain, at least for the foreseeable future,” the two researchers said.

As for the Arctic’s much-hyped oil and gas reserves, that too is clouded by risk and uncertainty, their paper said.

“As was the case with maritime transport, the potential for Arctic energy exploitation is not easy to cash in on.”

And the paper’s authors cite a long list of factors that make Arctic oil and gas development a difficult task:

• oil spill management is “technologically difficult, if not nigh on impossible;”

• oil spill costs create huge potential liabilities for developers, such as British Petroleum, which paid $4.5 billion in fines for its Deepwater Horizon spill and even bigger cleanup costs;

• Arctic projects require long lead times and huge investments, so unpredictable events could cause such projects to be cancelled;

• required coastal infrastructure could be threatened by permafrost; and,

Because of all these risk factors, “overall Arctic development is still difficult to forecast,” their paper said.

“The Arctic has many potential trajectories and uncertainties.”

And to measure all those risks, the Arctic needs a “de-hyped” analysis of its potential, they said.