Another delay in protection of Nunavut’s ancient Arctic forest: minister 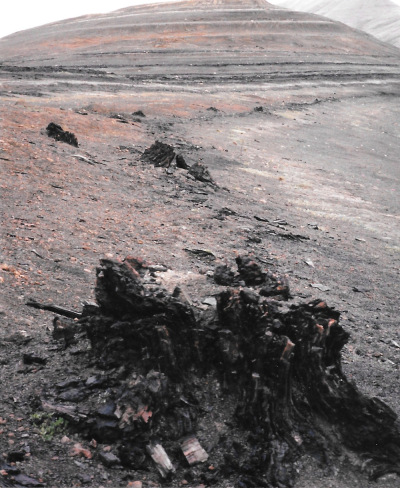 This ancient stump lies unprotected on the Geodetic Hills of Axel Heiberg. (PHOTO BY JANE GEORGE)

Nunavut’s unique fossil forest has been around for 50 million years — but it looks as if the mummified remnants of this ancient Arctic forest on Axel Heiberg Island will have to wait a little longer yet to garner protection.

Nunavut’s environment department says it’s carrying over the $215,000 earmarked for a territorial park feasibility study for yet another year.

“It is our intention that in the 2016-17 fiscal year, we will complete feasibility studies for a new park at Napaaqtulik on Axel Heiberg Island,” Johnny Mike, the environment minister, said Nov. 3 in the committee of the whole meeting to discuss his department’s budgetary requests.

The park’s name, Napaaqtulik, “where there are trees,” was inspired by the forest of towering trees which once thrived on Axel Heiberg then died back and were buried under the sandy soil of the Geodetic Hills.

The site is unique because ancient remains reveal that a tall, lush forest once covered the slopes, 40 to 50 million years ago, during a period called the Eocene, when the mean average temperature in the polar region was a balmy seven to 15 degrees C.

Stumps and logs from that era, as well as remnants of the leaves that covered the forest floor, can still be found in their original positions. These fossil remains are even more extraordinary because they aren’t petrified, or turned to stone, but mummified instead.

People in the High Arctic communities of Resolute Bay and Grise Fiord have said they want to see a territorial park created to protect the ancient fossil forest from exploration.

Although the Greely scientific expedition found fossil forests on Ellesmere Island in the late 1880s, the fossil forest on Axel Heiberg was only discovered 25 years ago.

Since then, it’s been studied by several research teams, dug up by a group of American scientists in 1999, and left unprotected.

And the fossil forest’s trees and plants, only recently exposed by erosion, become extremely brittle when they’re in the air — and can be damaged by any disturbance.

The park’s creation has been up for discussion in the legislature since 2010, when the GN said the process of founding a territorial park to protect the forest could take up to 10 years.